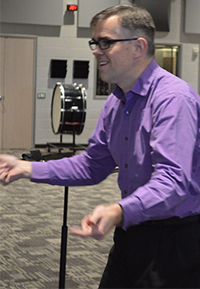 While his bandmates rehearsed “Swingin’ the Blues,” on their trumpets, trombones and saxophones, senior Byron Center High School Jazz Orchestra member Nate Seese talked about the opportunity to play with music legends and perform nationally.

“We’ve now established ourselves as one of the best groups in the nation,” said the trombonist about the orchestra’s second year in a row as the only Michigan school to qualify for Savannah Swing Central Festival, in Savannah, Ga.

The 20-member Jazz Orchestra is on its way to Savannah, March 24-27. Byron Center is the only Michigan high school band to ever qualify for the national competition. Just 12 high school bands, who submit recordings reviewed by an independent panel of professionals, are selected as finalists to participate in the three-day workshop and competition.

But while students are looking forward to heading south, Byron Center High School Band Director Marc Townley is focused on bringing the best out of his students every day.

He views his jazz players as much more than high school musicians; they are talented instrumentalists with the potential to play on a national stage with professional musicians, he said.

“We emphasize the traditions of the music and playing it on the highest level,” said Townley, who has connected his students with big names in the music world: Christian McBride, Wycliffe Gordon, Ali Jackson. “We talk to our kids about is having a product good enough to play with those musicians,” Townley said.

It’s this approach– students perform for more than just the school or an audience of high-school parents– that transcends them naturally from band room to professional venue.

“When we do gigs or concerts, we are expected to act like professional musicians, not just high school students,” said orchestra member Evan Stambaugh, a bass tromonist.

‘Music is the Byproduct’

The jazz orchestra is one of several successful branches of the music program at Byron Center High School. The Marching Band, directed by Megan Soukup, took first in the state competition in November for the Flight III Division.

But Townley, who has led the band for 10 years, has brought big-name musicians including Gordon and Christian McBride, to the high school’s Van Singel Fine Arts Center to perform with his students. Talk about transcending a typical high school band experience.

“I’m never afraid to ask,” he said of inviting the artists to perform. “It’s very inspirational to play with your heroes and musicians you grow up listening to.”

Nathan Seese also attended the Savannah competition last year, which included playing on the riverfront during the Savannah Music Festival.

“It was one of the most fun experiences of my entire life. It was such an enjoyable time, having fun and playing great music for great people,” he said, noting a clinic he attended with Wycliffe Gordon. “Mr. Townley is a really great band director who will point out your flaws. He is willing to do what it takes to get you to where you need to be… He really helps build a strong foundation for everything we do.”

The orchestra is also auditioning for the 2015 Essentially Ellington Competition and Festival scheduled May 7-9 at Lincoln Center, in New York City. High School bands chosen as finalists each receive an in-school workshop led by a professional musician before coming to New York to put up their “Dukes” and perform before Wynton Marsalis and a panel of esteemed judges.