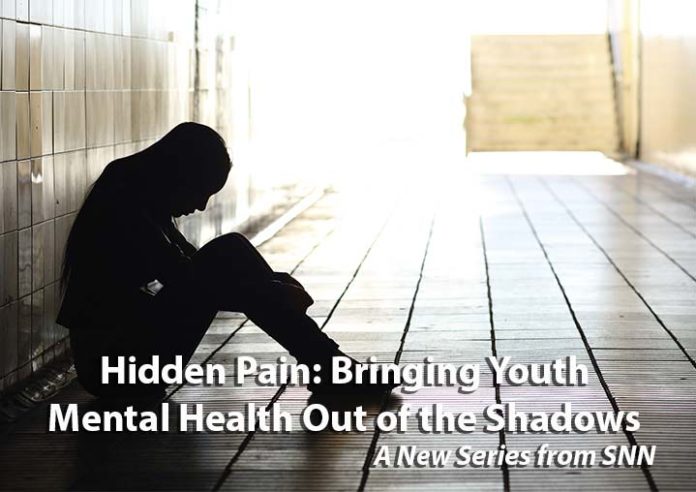 The theater was quiet except for the rustling of popcorn bags. When the movie ended, the silence was louder.

That silence was what the movie was about: not talking about mental illness because of its stigma, not hearing the sounds of those thinking of killing themselves, and not asking the big question: Are you considering suicide?

The showing of the movie, “Hope Bridge,” at Celebration Cinema South on Sept. 17 was followed by a panel discussion about teen suicide and its warning signs. Tragically, the event could not have been more timely.

Four middle- and high-school students in Kent ISD schools have taken their own lives since July, three of them shortly before school began. According to the Kent County Health Department, as of early September five county residents age 19 or younger had completed suicides this year, not including two of the Kent ISD students who did not live in Kent County. There were six suicides in that age group in all of 2014.

Tragedies like these, and increased reports of student anxiety and depression, have prompted educators to more urgently address mental health issues in area schools. Though many schools already have preventive programs in place, educators say factors like pervasive social media, cyberbullying and academic pressure are taking a heavy toll on today’s students.

This year, School News Network will be looking at the subject through a series of stories about student mental illness, its symptoms and causes — and, most importantly, how to start talking about it.

Christy Buck, executive director of the Mental Health Foundation of West Michigan, refers to the movement to spread the word about mental health as the new “stop, drop and roll” saying for schools.

She says a huge obstacle for dealing with mental health and suicide issues is people not wanting to talk about it.

“We know 80 percent don’t get help because of the stigma,” Buck says. “They don’t want to admit to feeling this way.”

‘We Can Never Do Too Much’

In the four Kent ISD districts where students have died by suicide since summer, staff and fellow students have been forced to confront ongoing concerns about students’ mental well-being in a more personal way.

A Rockford middle school student took his own life a few days before school started, Superintendent Michael Shibler confirmed. A crisis intervention team came to help students deal with the tragedy, which Shibler said highlights the need for adults or students to call 911 if they suspect someone is suicidal.

Rockford Public Schools already has several mental-health programs in place, including the DARE drug-education program and a peer listening student group in high school. It is also implementing in all of its buildings the state’s OK2SAY program, empowering students to confidentially report threats, bullying or other unsafe behavior.

“Suicide is never, ever the answer,” OK2SAY presenter Chris Coady told North Rockford Middle School students Thursday. “There are people out there who care about you and want to help. Please reach out to them.”

The district’s fourth annual “Developing Healthy Kids” community education series also focuses on mental health. On Oct. 21, comedian Kevin Breel will talk about his battle with depression in a public program, “Confessions of a Depressed Comic,”at 6:30 p.m. at the Rockford High School Auditorium. And as part of World Suicide Prevention Day on Sept. 10, the school district and Rockford HOPE sent a flyer listing suicide signs and resources to all Rockford Public Schools staff and parents.

Despite such efforts, the recent suicide highlights the need for greater vigilance, Shibler said. “We can never do too much when it comes to trying to build awareness and to get students help when it’s needed.”

Unlike physical illnesses such as heart disease, he added, a stigma still attaches to problems in the brain: “We look at mental illness as something we don’t understand, something many times beyond acceptance.”

Reaching Out to Grieving Students

At Kenowa Hills Middle School, a crisis response team offered counseling to classmates and teammates of a student who died of suicide in July. They also personally contacted friends who staff members thought might be in special need of help. Many had received counseling from private therapists, said school counselor Linda Saum.

Saum said the district has had only one other student suicide in her 17 years working there. Having four within Kent ISD schools over two months is very rare, she and Principal Abby Wiseman agreed.

“I hope it’s not a trend,” Saum said. “Up until this point, it’s not.” However, she added, mental health in general is a “huge concern” for all ages.

At the middle-school level, it’s complicated by students trying to fit in, changes in their minds and bodies and, increasingly, the prevalence of social media in their lives. Snapchat messages and Instagram photos provide students with new ways of being mean — and unlike a mean remark in class, online insults follow you home.

“You re-read that awful statement over and over again, as opposed to it was said to you once at school and you move on,” Wiseman said. “I don’t think you can as easily get over some of those things that have been said.”

“Mental health is an urgent need,” Wiseman stressed. “Whether they’re a threat to themselves or to someone else, it’s an urgency in our country right now.” She said the school aims to bring awareness to the issue “in a healthy way.”

“We have some things planned throughout the year to help students,” she added, in regard to the recent suicide, “to not ignore it, to acknowledge that this happened, and that they need to speak up if they know somebody’s having a problem.”

The showing of “Hope Bridge” at Celebration Cinema South was a dramatic way of encouraging people to speak up when they suspect someone is feeling suicidal.

The movie is about a son’s search to understand why his father took his own life, and the son’s attempt to do the same. The film shows people what to look for when loved ones suffer from depression and suicidal thoughts. It also offers help to those who are struggling with why it happened.

‘We look at mental illness as something
we don’t understand.’
— Michael Shibler, Rockford Public Schools

Jeff Elhart and his family, business owners from Holland, sought a way to educate schools and communities about mental health after suicide affected them personally. The Elhart family lost Jeff’s brother, Wayne, retired owner of Elhart Automotive Campus, to suicide in March.

When they learned about “Hope Bridge” and its message, they wanted to find ways to show it to schools and communities. The family has been helping fund the showing of the movie in West Michigan and other states. More free showings are being planned.

“We want to show the movie wherever a group wants to see it,” Jeff Elhart said. “Mental illness conditions are treatable, and suicide is preventable.”

The Elharts are working with The MentalHealth Foundation of West Michigan and the producers of the film, Christi and David Eaton of Loveland, Ohio. The movie, released in May, stars Booboo Stewart of “The Twilight Saga” film series and “X-Men: Days of Future Past”; Kevin Sorbo, star of “Hercules: The Legendary Journeys”; and Rebeca Robles. (If you are interested in showing it at your school or community, contact Christy Buck at the Mental Health Foundation, 616-389-8601.)

After the recent showing of “Hope Bridge” ended, few people got up to leave the theater right away. Most didn’t even turn to talk to the person next to them to discuss what they thought of the movie. Buck hopes what they saw, though, will help break the silence.

“Seeing the movie is a step in moving forward,” she said.

‘Every child has their story’