Will Provide Nearly $20 Million to Support Teaching and Learning 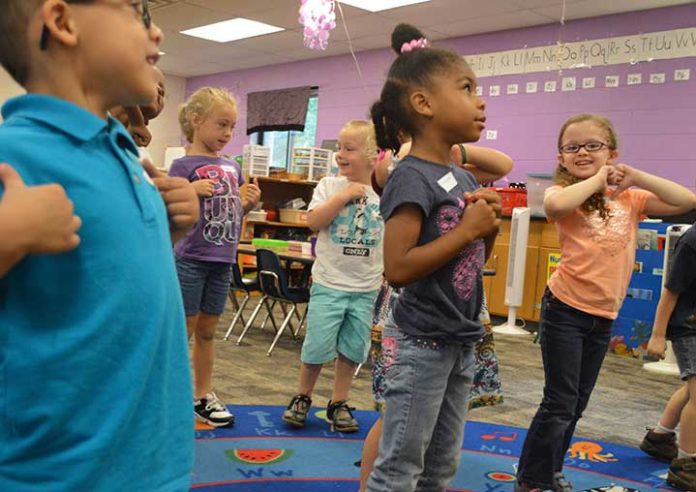 Christie Ramsey was very happy for her three children in Rockford Public Schools, following Tuesday’s approval of an enhancement millage providing $19.9 million for local schools. But she was just as happy for all 94,000 students in Kent ISD, whose districts will each get $211 per student to help meet their educational needs.

“I can’t even say how excited as a parent and activist I am that this passed, and how proud I am of all our superintendents and parents and community members who supported this,” said Ramsey, who worked for its passage as parent co-chair of Friends of Kent County Schools. “That’s a huge feat to get it passed in 20 districts with 20 different economies. (It) says a lot for our community.”

By making Kent ISD the sixth intermediate district in the state to adopt an enhancement millage — by a 54 to 46 percent margin — nearly 40,000 voters showed they not only place high value on public schools, but recognize they need more help than they’re getting from Lansing, leaders said.

“I think it’s a reflection of the community’s support of their local schools, and the quality work happening in those schools, and an understanding of the financial strain these schools have been under for quite some time,” said Ron Caniff, superintendent of Kent ISD. “I’m very grateful to our voters and our stakeholders for their support.”

School district leaders are grateful as well for the 0.9 mill levy from voters. Far from a windfall, it will help them maintain programs, retain and attract staff and pay for classroom materials by supplementing lagging state funding, superintendents say.

“Not only am I grateful, but I will make sure the community gets a positive return on their investment,” said Teresa Weatherall Neal, superintendent of Grand Rapids Public Schools, which will realize about $3.5 million from the millage.

Neal and others attributed the win to school leaders, parents and community members pulling together to explain the need and a funding mechanism new to local voters. Through social media, community meetings and testimonial videos, the word got out despite last-minute robocalls urging a no vote, Ramsey said.

“I think the message was clear: If we can get this money, we can maintain programs,” she said.

School News Network spoke to four superintendents about what the millage will mean for their students and districts.

Although her district will reap the largest amount from the millage, Neal saw the vote as a big plus for all of public education in Kent ISD.

“It really speaks volumes not only for Grand Rapids Public Schools and our supporters, but across the county,” Neal said. “It sends a strong message as to how people in this county feel about the children we are serving and those of us who are serving the children.”

Neal credited a broad range of support “from one end of Kent County to another,” and Caniff for taking on such an ambitious proposal so early in his tenure at Kent ISD, saying it “speaks to his great understanding of what is needed in this community.” That voters approved it by a comfortable margin was “a vote of confidence in our public schools,” she said.

For the nearly 17,000 students in GRPS, the millage will mean continued focus on third-grade reading, middle school science and math, and more money for classroom materials, Neal said. It will also help GRPS recruit and retain high-quality staff, she added.

She said the district will begin allocating the funds once the school board has balanced the budget, but emphasized, “I’m not looking to those dollars to fix the deficit.”

Neal thanked the broad community for making the millage a reality: “This was new for us to come together and all roll in the same direction. It just shows the power of one voice.”

Superintendent Dan Behm came to work on Wednesday feeling “a deep sense of gratitude to our community and the entire region,” he said.

Public education and teachers have taken somewhat of a beating when it comes to funding, Behm said.

“An election like this reaffirms people’s trust in and esteem for the people who teach our kids,” he said. “I heard lots of voters say ‘Yes, we want to support the staff in our schools.’ After a decade of cuts, our community realizes that those who work the front lines have been making sacrifices to keep their children’s education the priority.”

Behm said two of three voters in the district supported the measure, and nearly 24 percent voted. Every precinct that was exclusively Forest Hills voters passed the request.

The district laid out before the vote that increasing pay to retain and attract teachers was the priority if the enhancement millage passed. Behm said a “very modest” pay increase will be factored into the budgeting process, though increases are subject to collective bargaining and negotiated agreements.

For perspective, he said, “given that the cost of a 1 percent increase in salaries for employees and granting a salary step increase for those who are eligible to receive one costs $190 per student, the enhancement millage money does not create some sort of windfall, though this certainly helps.

“As we’ve said all along, we’re not going to use this to buy a shiny new object, but to support the people who do the primary work every day with our children.”

Behm said maintaining and designing quality programs for students also would remain priorities. Those include K-12 counselors in school buildings, additional reading support at the elementary level, and the district’s own transition program for severely cognitively impaired students.

“Maintaining what we have doesn’t sound very scintillating,” he said, “but if it hadn’t passed, we would have had to make a 13th straight year of cuts.”

Superintendent David Britten said the approval means he most likely won’t have to lay off staff members to cover a budget deficit. The district was facing the possibility of eliminating three or four teachers as well as a few non-union support staff. “I don’t think we’re going to need to do that,” he said.

The district should also be able to expand its dual-enrollment options for high school students to receive college credits, and implement innovative ideas coming from its ongoing human-centered design study, he said.

He said he believes people in Kent County see the value of public education to the region’s continued growth.

“I think people get it that Lansing has for years failed to keep up with inflation, let alone meet the needs of schools,” he said.

He is proud that voters countywide are willing to join forces, and support from the Grand Rapids Area Chamber of Commerce was impressive. “This area is strong because of its diversity but also because of its willingness to come together,” Britten said.

Britten also has bragging rights that Godfrey-Lee voters passed the millage with the highest percentage of “yes” voters in the city of Wyoming, at 59.3 percent. Votes in the one-square mile district tallied 115 “yes” and 79 “no.”

Still, much work remains in advocating for adequate and equitable funding, Britten said. He called it ironic the vote came the same day the state House of Representatives passed “a pretty pathetic version of the K-12 budget.”

Even though the millage was not supported by his district’s voters, Superintendent Mike Weiler said it was a great win for his students and the whole county.

“I never thought I’d see the day that we would ask for and pass a regional enhancement millage,” Weiler said. “I didn’t think the day would come. But I’m glad it did.”

Tyrone Township and Casnovia, which constitute more than 90 percent of district voters, defeated the request, 377 to 292. (Results from Muskegon, Ottawa and Newaygo counties were not available.) While “not thrilled” by the local result, Weiler said, “We knew this was a countywide effort.”

The $282,000 from the millage will help the district balance its budget and provide new services across the district, he said.

The millage also helped the district avoid difficult cuts, he said. While plans have not been finalized for the new revenue, Weiler said some of it will go to restore the district’s fund equity, or savings, to at least 5 percent.

“We will also need to see what the Legislature is going to do with the state aid bill for next year before we can make any of those other final determinations,” he said.

The vote showed taxpayers across Kent County understood how dire the need is, Weiler added.

“We got the message out to our constituents that school funding has been lagging for several years, and we were at a point where additional revenues were really not an enhancement, but a necessity across our county.”

SNN Story on Why the Millage was Needed