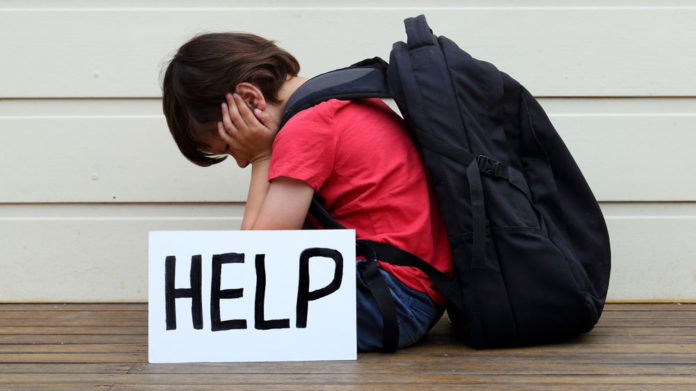 Homeless, with Homework: A new School News Network series on homelessness in schools and its connection to housing. As costs rise and the rental market has low availability, nearly 2,500 students in Kent ISD public schools are facing homelessness. These stories look into what’s led to the issue and how it impacts students.

Schools — urban, suburban and rural — are seeing increased numbers of homeless students and fewer options for housing because of high rents and scarce vacancies. Coordinators who work with students and families facing homelessness ask where they are staying and inform them about 211 services including shelter information. But they often can’t do much more. Even shelters have long waiting lists.

The school coordinators say families are living in cars, campers, motels and, most commonly, in “doubled-up” arrangements with other families.

“I really feel, truly, when it comes to finding a house, I’m more of just emotional support because there aren’t options,” said Sarah Weir. She is  Kentwood Public Schools coordinator for the McKinney-Vento Act, federal legislation that helps children continue to go to school even if they don’t have a permanent home. (To receive services, such as transportation, under the act, they must be identified as homeless, according to certain criteria.)

Casey Gordon, who coordinates the McKinney-Vento Act grant for Kent and Allegan counties at Kent ISD, said more students are facing prolonged homelessness and are being newly identified as homeless.

“It’s directly related to the lack of affordable housing,” she said.

School districts each year start their count of homeless students in July. During the first few weeks of school in Grand Rapids Public Schools, 194 students newly reported as homeless.

‘Almost everyone I work with is working, they just can’t afford the rent. So many are doubled up.’

Weir, who is in her fourth year in the position, said last school year 216 students were identified as homeless in Kentwood. This year that number was already at 165 in mid-November. “It’s never been this high in the three years before this,” she said. “It’s been the busiest start that I’ve ever had.”

No Place to Call Home

Gordon said the issue is as much a problem of housing availability as affordability. Grand Rapids has less than 4 percent of rental units available, which is one of the lowest rates in the country.

“That means we have lots and lots of people applying for every apartment and home that’s available,” Gordon said. “Landlords and rental companies then have a variety of applicants to choose from. They look at every factor, including incredibly high credit scores. Anyone who has a barrier in their past credit history, it becomes very difficult for them to find an affordable unit.”

Gordon said she received eight calls in one week from people asking for rental assistance. “They are working multiple jobs and still don’t have enough to make their rent payment.”

However, there aren’t enough resources to meet demand for help paying the rent. “We absolutely have a dire need for more resources to keep people stable,” she said.

‘They are working multiple jobs and still don’t have enough to make their rent payment.’

That’s the case on Grand Rapids’ rapidly developing West Side, where skyrocketing rents have driven out many residents, while homes for sale are hard to come by and out of many buyers’ price range. So says Jim Davis, a city planning commissioner and executive director of Westside Collaborative, an alliance of nonprofits and faith-based agencies that works to support equity and quality of life for all. Davis says renters may hear from landlords, “Hey, we love having you, your lease is up. We’re going to take your $900 a month payment and it’s going to be $1,800, but we hope you’ll stay” – not a realistic option for most.

Related Story: ‘We didn’t notice they’re gone’ – A West Side resident with two children in Grand Rapids Public Schools, Jim Davis worries about the families who can’t afford to live in that booming area and the impact on schools.

With 43 percent of families not earning enough to afford basic needs, according to a report completed by the Michigan Association of United Ways, incomes aren’t aligning with housing prices.

“In the last five years, that’s been the trend they’ve seen increasing,” Gordon said. “People from Grand Rapids and northern parts of Kent County and many other districts are landing in the hotels in Kenowa Hills.”

In Kentwood, Weir said most families that come to her — about 10 each week — have exhausted their options. Minimum wage jobs paying $9.45 per hour — that’s $1,638 a month for a 40-hour week (if one got paid in full for every week of the year) — don’t come close to paying the bills.

“They can’t find a place,” Weir said. “Almost everyone I work with is working, they just can’t afford the rent. So many are doubled up — more than ever before.”

Weir has families facing sudden homelessness because apartment complexes are hiking rates and not renewing leases, forcing families to move when prices increase. “We are running into a lot of people who have a place to live and they think everything is fine, then they get kicked out because (the property owner) can charge more.”

Weir used to print out lists of available rentals. Now, she helps families get on a list for shelters. One Kentwood family living out of a car was 21st on a waiting list to get into a shelter.

“I tell them the best thing is to keep your eyes open when driving around,” she said, noting that private homeowners aren’t always as strict about credit and eviction records.

In Comstock Park, McPherson, educational support services coordinator, said many of her families — working two or three low paying jobs to make ends meet — are priced out of the rental market. She had 15 students in early November living in Grand Rapids shelters.

“They were on the waiting list so Salvation Army was putting them up in hotels until there were openings,” McPherson said. (Under the McKinney-Vento Act, students have the right to be transported to their district of origin if needed and feasible.)

About a quarter of students in Comstock Park schools live in the York Creek Apartments, where two-bedroom units start at $785. If families lose those units, there are few other options available. One hotel in the district offers extended stays, but it’s full too, she said.

“When a house or apartment comes available that’s reasonably priced, it’s snatched up very quickly. There’s just not the availability out there. We are so small and there are not that many rental properties outside of York Creek,” McPherson said.

In Cedar Springs, “We are the highest we’ve been since we’ve had a homeless liaison,” Ashley Reynolds said of the 75 homeless students she’s worked with so far this year.

“There were two houses listed for rent and two of our families went to look at them, but they were like $1,600 for a three-bedroom. They just don’t have the means to afford that.”

A fire at Red Flannel Acres, an affordable housing community in the district, destroyed eight units, displacing several families and leading them to double up with other families.

Another trend is living in campers or tiny cottages on campgrounds, Reynolds said. “We have a couple families who have campers that are going to try and stay in there all winter. You never want to see that, but then if they don’t have anywhere else to go it’s better than nothing.”

Prices Higher than Many Can Afford

Many families live on incomes above the poverty level, but don’t earn enough to cover basic needs.

Statewide, of 3.935 million households, 14 percent lived in poverty in 2017 and another 29 percent had incomes under what’s needed to cover basic expenses.

In Kent County, including those living below the poverty line, 37 percent of families did not earn enough to cover basic needs.

As for wages, 61 percent of all jobs in Michigan pay less than $20 per hour.

Gordon hopes to see increased community efforts to help families afford housing, keep their jobs, be able to work — and have their children go to school without worrying about being displaced at the end of the day. “We need real affordable housing,” she said, adding, “$1,200 a month is not affordable housing for a family of five that has one income and little ones.”

Gordon said many cities and counties across the nation are taking steps to increase affordable housing options. They are tapping into grant sources, incentivizing developers and working through planning commissions.

The issue can be controversial, however, because of the stigma surrounding affordable housing. Communities often resist multi-family residences.

‘We have a couple families who have campers that are going to try and stay in there all winter.’

But city master planning should prioritize long-term stability and growth, without increasing family and youth homelessness, she said.

“We see some very hopeful things but we also see problems that continue to be a problem. The ‘We don’t want affordable housing here. Why would we incentivize multiple family units?’ It is a tension between everyone wanting a wonderful place to live, work and be, but how do you ensure you have equality in that system?”

Nevertheless, she said, people can work together for the benefit of all.

“Business owners, politicians and the city really have a significant interest in ensuring we are a community where everybody is able to live and work and get around.”

A series on homelessness in schools and its connection to housing. As costs rise and the rental market has low availability, nearly 2,500 students in Kent ISD public schools are facing homelessness. These stories look into what’s led to the issue and how it impacts students.