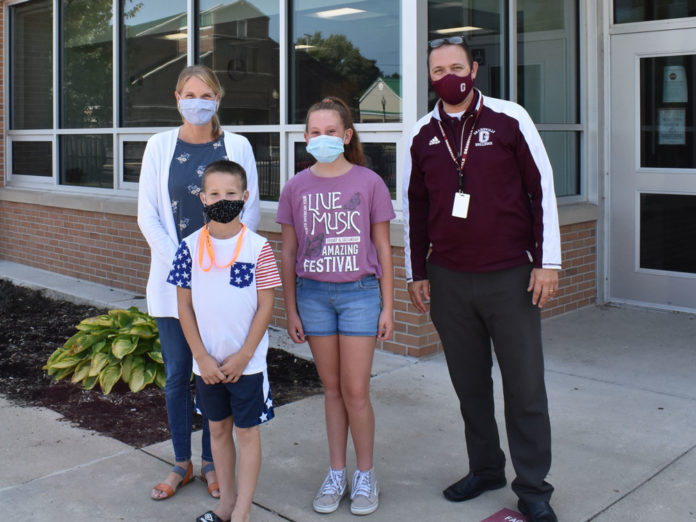 The announcement over Central Elementary School’s intercom last Thursday came as a surprise to Oliver Dobrowolski, who was enjoying quiet reading time in his fourth-grade classroom.

“I thought maybe it was a fire drill, because we weren’t expecting anything to happen,” he said. “And then they announced that we were a Blue Ribbon School and people started cheering. But I was like, I don’t know what that is! So our teacher told us that we got this award and our school name was announced in Washington, D.C. – and then everyone was clapping and yelling woo-hoo! It was all very exciting.”

For those not in the know like Dobrowolski, Central Elementary is one of 367 schools nationwide to be named a 2020 National Blue Ribbon School by the U.S. Department of Education. The honor is awarded based on a school’s progress in closing achievement gaps or its overall academic excellence.

“This (award) means so much for our staff – I haven’t done anything, I’ll be honest, this is all them,” said Gelmi, in his second year as principal at Central. “It’s a confirmation that all of the things we’re doing are working and we’re making a difference in each of our kids’ lives. It’s so fun to have that external recognition for our staff, because I know they work their tail off to do what’s best for kids.”

Blue Ribbon awards are data-driven, not based on personal nominations, Gelmi said. State officials collect achievement scores and other data from each of its schools – both public and private – and then send the top-ranking information on to the Department of Education.

Gelmi highlighted Central’s success with K-6 instructional interventions – a program or set of steps to help children improve in a particular area –  as one reason for the award.

“In kindergarten, at the beginning, probably about 15-20 percent of our kids are being supported (with interventions),” he said. “By the time they get to fifth or sixth grade they don’t need that support anymore because our system is working. I think we had only one intervention in sixth grade last year.”

Resource teacher Anne Hoover said teachers have been especially motivated to improve ever since the state of Michigan identified Central as a Focus School a few years ago. A Focus School designation, which Central no longer holds, means that the state has identified an educational deficiency in the school’s performance.

“We were a Focus School because we had such a great discrepancy between our high (performing) students and our lower students,” said Hoover, a 10th-year teacher at Central. “So we put in a lot of extra time with professional development, because we knew we couldn’t stay that way! And it was amazing to see teachers all working together, among all the grade levels, to make sure everyone has the supports they need.”

Hoover described the school staff as “a little family.” Since Central Elementary only has one class per grade, teachers have to work extra hard because they don’t have that grade-level partner to lean on. This has pushed everyone to be better at communicating, she said.

“We like to share what we’re doing and how it’s working and offer ideas to one another,” said Hoover. “And none of the teachers here are complacent – we are constantly updating our goals.”

Another key component to Central’s Blue Ribbon status has been the staff’s focus on fostering relationships and a positive environment at school, according to Gelmi.

“Our staff knows our kids and our families, and they really care,” he said. “That makes a huge difference because, as much as we want to grow them on the academic side, you can’t even start to open that door if you don’t have a relationship with them.”

Those relationships have meant that sixth-grader Annie Osborne starts each school day with a smile on her face.

“When I wake up I just get super-excited to come to school, because all the teachers are super-nice and they care about you a lot,” said Osborne. “I see them all working hard to help their students, and Mr. Gelmi working to keep the school awesome, and it’s just an amazing place to be.”

The coronavirus pandemic means the Blue Ribbon School celebrations will be a bit muted this year, but the Department of Education is planning to hold a virtual award ceremony in November. Gelmi said he’d also like to hold some sort of gathering at Central, once virus restrictions are lifted, to be able to celebrate with students, staff and the community.

“The partnership that we have with our community has been a big piece of our success,” he said. “I feel like whenever we put something new in place, they just trust us and they’re so supportive. And I think that’s a nice reflection of our overall process within Grandville Public Schools; some really good things are happening here.”

And, now that Dobrowolski knows what a National Blue Ribbon School means, the fourth-grader says he’s eager to do his part to continue that success.

“I think it might give us an incentive to work harder,” he said. “Now that we know we’re such a great school, we probably want to keep that record.”

‘They have a need; we have excess that we can share’