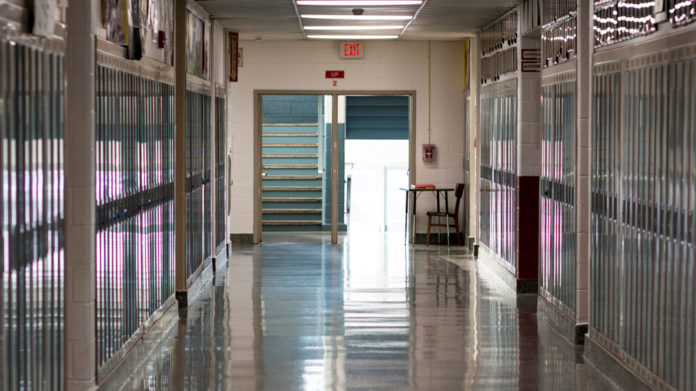 Caledonia High School was the first to close. After just a week, parents received notification that the school would pivot to remote instruction for two weeks due to six positive cases  of COVID-19.

Since then several other area districts have made the call to close schools, also usually for two weeks, to stop the spread of the virus among the school population.

“In our case we had a number of students who in the first few days of school showed symptoms and confirmed positive,” said Caledonia Public Schools Superintendent Dedrick Martin. “Back when we closed in September, the level of activity outside of our school environment was pretty well known. There were many close contacts that pushed us to (quarantining) 80 students on the second day of school.”

When faced with clusters — and sometimes even individual cases — of the novel coronavirus, schools make the call to close based on factors including the number of people infected and then number exposed who must quarantine as a result. It’s a tough decision and one no superintendent or health official is eager to make: weighing the threat of the virus against the academic and social-emotional toll of losing even more in-person education.

Such school closings and a rise in positive cases statewide prompted West Michigan superintendents to issue a letter this week reminding the community of the need for safety protocols.

So what goes into the decision to close?  Some schools have remained open despite several confirmed cases, while others, like Gladiola, closed after one case because the individual who tested positive had many close contacts.

There is no “tipping point” or number of positive cases that serve as criteria to close a school,  said Joann Hoganson, director of Community Wellness for the Kent County Health Department. Hoganson works as the liaison between the Health Department and schools, providing guidance to district leaders so they can make wise decisions consistent with public health.

“We are much more looking at the direction the infection is going,” she said, noting that they assess whether the virus seems to be spreading despite mitigation efforts. “We also know that if we don’t recommend classes stop, there are times it would get so far out of control we wouldn’t be able to reopen quickly and that would be worse.”

Still, the Health Department is not out to close schools due to every case, she stressed. They weigh all options.

“Suspending school activity is a last resort,” she said.

When there are positive cases in a school, Hoganson and superintendents review whether prevention measures are being enforced strongly enough, including social distancing, mask wearing, screening students so they don’t enter the building if they are COVID-19 positive, hand washing and sanitizing surfaces.

“Are we following our own plans? Are we being meticulous in doing what our plans say we are going to do?” she asked. “When that’s all being done and there’s still spread, it could be necessary to take a break from face-to-face school time to stop the spread of the virus.”

The Health Department calls upon the district to take official action, but the recommendation comes with a lot of weight.  “If they chose not to follow the guidance we do have further legal authority through the public health code, but we have not had to draw upon that,” Hoganson said.

The duration recommended for closure usually is enough time for students to stay home, she said. “Two weeks is a good measure of time to close because that usually aligns with quarantine of students,” she said. Often, as in the case with Rockford High School’s closure, many students are already out due to quarantine by the time a school closes. Each positive case is reviewed carefully to determine all close contacts an individual has had. The number of students quarantined can grow quickly. An athlete participating in a close-contact sport, for example, may have many contacts, Hoganson said. In Rockford, many students who were school athletes had to quarantine, though she does not know if what caused them to be considered close contacts was from  games, practices or outside of the regular sport time. Much of the spread has occurred outside of school.

What does quarantine mean?

Staying at home and not having social interactions outside the family. When in quarantine, according to WebMD, you should stay home unless you absolutely must leave, such as for essential medical appointments.

While at home:
• Separate yourself from other household members and pets
• Use a separate bedroom and bathroom if possible
• Not share utensils, dishes, cups/glasses, bedding, towels, and other personal items
• Wear a mask if you can’t separate yourself

Household contacts of a COVID-positive person must also quarantine. (Notably, the siblings of students quarantined due to exposure do not have to quarantine as long as they aren’t showing symptoms. They are considered secondary contacts and may continue to go to school, but should monitor for symptoms, Hoganson said.)

Contact tracing is also key for containing spread. It involves looking back over 48 hours prior to a positive test or onset of symptoms to determine everyone a COVID-positive person has had close contact with. Those contacts who have been within six feet of the COVID-positive person for 15 cumulative minutes must be notified and go into quarantine.

‘Ripple Effect’ Can Cause Need to Close

Staff availability played a large role in the decision to close Lowell Middle School for two weeks beginning Oct. 7 after some staff members tested positive and others had to quarantine (although no students), according to interim Superintendent Nate Fowler.

“We ended up having 10 staff quarantined, so that’s a number of staff who could not come to work,” Fowler. “Some had tested positive, but some of them were quarantining due to circumstances out of their control, and they’re making decisions based on doing their best to support students and also being able to maintain a safe environment.”

‘It’s about balancing the need to keep kids caught up in school with the need to protect everybody’s health and safety.’

Fowler said conversations with the Health Department about the “ripple effect” of positive cases also helped the district take the more cautious approach. Those conversations included the middle school’s administrative team, as well as Director of Human Resources Dustin Cichocki, as part of the decision-making process.

“We looked at it like, by shutting down the middle school in person for two weeks, we would be better positioned to come back from that and provide our full programs at school once again,” said Fowler. “It’s about balancing the need to keep kids caught up in school with the need to protect everybody’s health and safety.”

For Fowler, the decision to close the middle school had a direct impact on his own family. Fowler has a son in middle school and the closure meant, among other things, that his son stays home alone during the day to navigate online learning. He’s also had to miss some cross-country meets, which was disappointing.

“It’s not easy and I know it firsthand — it definitely changes the conversations that we’re having at dinner, and some of the work that we have to do after dinner at the kitchen table to make sure he’s caught up,” said Fowler.

Without a vaccine, Lowell Area Schools may one day need to make another closure. Despite having gone through it once, Fowler said it won’t be any easier the second time.

“It’s going to continue to be a challenge because there’s always going to be a different set of circumstances with every one of these cases where we have to make this decision,” he said. “You feel like there’s no right answer, but you just try to make the best decision that you can with the information you have at that point. … I continue to be thankful for all the grace and support that everybody has shown as we try to navigate this.”

Listening to the Experts

In Rockford, Superintendent Michael Shibler’s decision to close was based on the Health Department’s strong recommendation — and a detailed conversation with Hoganson.

Shibler got a call on a Saturday afternoon from Hoganson, who told him she, Administrative Health Officer Adam London and Medical Director Nirali Bora agreed the schools should close after 17 students tested positive for COVID-19 and another 397 were quarantined due to close contact.

Shibler said he didn’t oppose the recommendation but asked a number of questions before deciding to follow it.

“It was a good conversation — it wasn’t like we were arguing,” Shibler said. “I would keep bringing up information and asking her to respond why she felt this would merit the closing of the buildings. It all comes down to stopping a potential spread.”

He said he brought up the following:
• Why closing was necessary based on a relatively small number of positive cases;
• The risk of causing student mental-health problems by disrupting their schooling;
• The need for quicker results from testing.

“What happens if I decide not to do this?” he asked at one point. Hoganson said they would probably go to court. Shibler said he was “not going to let that happen.”

Their discussion convinced him it was the right call, a decision reinforced when he also spoke with Adam London the following day. Shibler said he will always raise pertinent questions before he makes a final decision, but that ultimately he’ll follow the Health Department’s recommendations.

“I am always going to listen to the medical experts,” he said. “It doesn’t hurt to push back, to challenge and dig deeper to find the background behind what they’re recommending. But we should always be following the medical health experts.”

In Caledonia, Martin said he thinks everyone is concerned about what the fall and winter will bring.

“The staff relies a lot on our parents to share information with the district,” he said. “Staff is also vigilant and checking in with kids to make sure they’re OK.