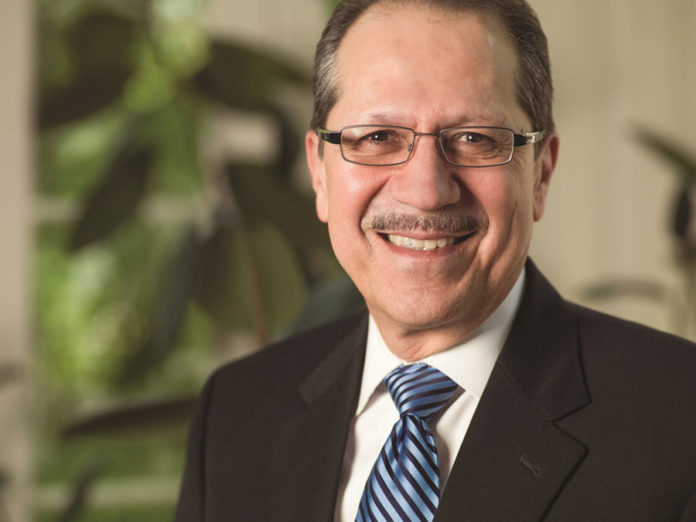 GRCC— Juan Olivarez, GRCC president from 1999 to 2008, will return to the helm of the community college, for the interim.

According to a press release, the GRCC board of trustees on Monday, May 16 unanimously voted to appoint Olivarez as interim president while they search for a permanent successor to outgoing President Bill Pink. Olivarez, who was GRCC’s eighth president, was named president emeritus in 2018.

As president, he worked to increase access to a quality college education and cultivated student-serving partnerships with local businesses, public entities, and nonprofit organizations.

“Dr. Olivarez knows this college because he helped shape it to become the success it is today,” said David Koetje, chairperson of the board of trustees, in the press release.. “He has long been respected for his leadership here at GRCC and in our greater community.

“There are challenging times ahead of us, and GRCC’s mission remains vital,” Koetje continued. “Dr. Olivarez is remembered for bringing people together and expanding opportunities for students so more people could take advantage of a quality education. His experience and vision will ensure this college continues moving forward at full speed while we select our next president.”

The trustees are in the process of selecting a firm to guide a national search to replace Pink, who was tapped to become president of Ferris State University starting on July 1. GRCC trustees are planning public sessions to discuss the selection process and timeline. Koetje said the trustees hope to have Pink’s successor selected by the end of the year.

“GRCC is such a special place for me, and I’ve been proud to have stayed connected over the years,” Olivarez said. “I’m excited to be able to come back, work with this strong team and ensure the work of this college continues without missing a beat.”

The son of migrant workers from Benavides, Texas, he was the first Hispanic president of any Michigan college or university.

Olivarez was an educator in Grand Rapids Public Schools for more than 20 years before becoming GRCC’s dean of institutional research in 1991.

After retiring from GRCC in 2008, Olivarez became president and CEO of the Kalamazoo Community Foundation. He was named Aquinas College’s seventh president in 2011, retiring in 2017. He was a distinguished scholar in residence for diversity, equity, and inclusion at Grand Valley State University’s Dorothy Johnson Center for Philanthropy between 2018 and 2021.

Olivarez has served on many national and regional boards and committees, including the Van Andel Education Institute, First Steps Kent, the Council of Independent Colleges, Educational Testing Services, and High Education Research & Development Institute as well as the National Institute for Literacy.