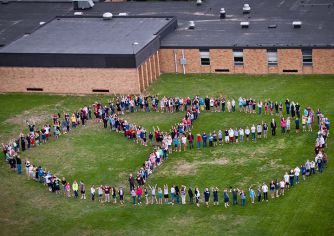 “Be Nice” messages recently made their way from student to student at East Grand Rapids Middle School; a bold-lettered banner in the EGR high school hallway reminds students to show kindness;  and signed pledges put the promise of niceness in writing. When put into practice, simply being nice can have a big impact, Kent ISD students are demonstrating.

The Be Nice initiative, started by the Mental Health Foundation of West Michigan in 2011, educates students about mental well-being, anti-bullying and the importance of treating each other with civility.

Christy Buck, executive director of the foundation, started Be Nice as an extension of the seven-year-old Live Laugh Love education program, which includes interactive lessons to help students, parents and teachers recognize symptoms of depression and the warning signs of suicide. Since then, Be Nice has surpassed her expectations, as dozens of schools have started leadership groups, held assemblies or hosted workshops centered on the concepts.

East Grand Rapids senior Will Thoms brought the idea to EGR High School last fall as a way for everyone to get involved in showing basic compassion. “It’s simple. It can be used everywhere,” he said.

Along with East Grand Rapids schools, students have formed leadership groups or participated in Be Nice activities in many districts, including:

Educators have led workshops at many local schools and several others have implemented the Live, Laugh, Love program with a Be Nice component.

At Byron Center High School, students led an assembly in April. Sophomore Ashley Boss shared her personal experience with depression and anxiety to the students, connecting it with mental health and the need to realize kindness matters. “This is serious; depression is real and it is happening everywhere,” she said. “It really shows people that they’re not alone in this.”

“It is a buy-in of an entire community that we need to recognize that how we treat each other has an effect on how people think, act and feel,” she said. Students are leading the way at schools, which makes the message resonate, said EGR junior Emma Vargo. “The message is a lot more powerful when you hear it from students,” Emma said.

The district also tied the theme into the recent Kabookie Week, an annual week of events and assemblies named for Jimmy “Kabookie” Gerken, an East Grand Rapids alumni who served as a role model for being nice and a champion of EGR schools. Gerken, who was developmentally disabled, died in 2002.

Students are spreading the in

itiative to others with a “fly-over” campaign, featuring students  standing together outdoors in a formation tha

t spells “BE NICE” while a videographer in a helicopter records it from the air above 23 different schools, Buck said.

Also, several brightly colored benches were located throughout Rivertown Crossings Mall, in Grandville, for a Be Nice awareness event that culminated May 1 with a Live Art event featuring local artists designing benches in the common area. Benches will be auctioned off, with the proceeds benefitting the Mental Health Foundation of West Michigan. 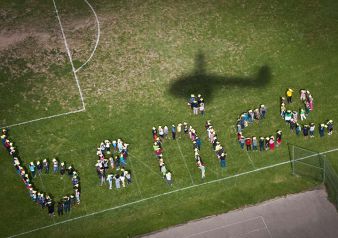 “As compared to other anti-bullyin

g programs, it’s really proactive encouraging people to reach out to others instead of just not bullying,” said EGR senior Susan Hoffman.

The bottom line is kindness can help someone’s overall attitude, Buck said. Bullying can lead to depression and suicide. “These simple efforts to infuse positivity into negative situations can make someone’s day and possibly save their life.” she said

Currently fewer than 10 percent of schools in the US offer a comprehensive mental health curriculum for students. Suicide continues to be the third leading cause of death among high school students in Kent County and nationally, Buck said.

What is Be Nice?