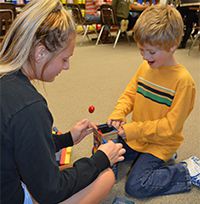 When you’re in elementary school and a high schooler gives you some attention, it feels cool. Thornapple Kellogg High School students have been making younger kids feel that way the past three years by building relationships with the district’s Big Brother Big Sisters program.

“The Bigs are like rock stars to them,” said Gayle Bachert, the Big Brother Big Sister Barry County Coordinator who runs the program, which refers to the older and younger partners as “Bigs” and “Littles.”

Chutes and Ladders and Candy Land board games, nerf footballs, plastic bowling pins, chess sets, puzzles and more cover the table in the room where Littles and Bigs met at Lee Elementary during the last hour of a recent Friday. Paige and McFall elementary schools also host the program. “All of this is educational, and improves social skills as well,” Bachert said.

Besides having fun, Bigs are encouraged to help their Littles with homework and read to them. Academic achievement is stressed, but that doesn’t mean learning can’t be fun, like when math problems are done using shaving cream. “What kid doesn’t like making a mess?” asked Batchert.

The results of the matches are what everyone wants to see.  “It affects every aspect of that child’s life,” Bachert said. “The Little is happier, will get along better with other children, and grades have gone up. I’ve seen children go from failing to high academic achievement.”

High schoolers are put through a screening process and hand-picked by the principal before becoming a Big. “They are the cream of the crop,” Bachert said.  About 30 matches have been made at the district’s three elementary schools this year.  It’s preferred a match to carry over from year to year so a child can have a three-year relationship while the Big is in school.

The program’s not just helping the young kids. It’s an eye-opener for the high-schoolers, Bachert said of the Barry County program, that also includes schools in Delton and Hastings schools. “They’re kind of put in a parent role,” she said. “They’re responsible for their safety when they’re together. We think it gives them some insight on why their parents made them and make them do what they have to do.”

Bigs are encouraged to share teachable moments with their Littles, along with their values and morals.

“I get time to spend with a younger child,” said Lauren Webster, a senior in her third year of being a Big to third-grader Frankee Keller. “I get to be a role model and help him with homework.” 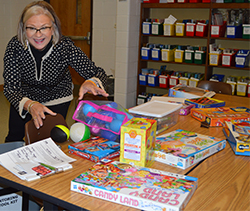 Frankee, once he finished his Blow-Pop, said he likes to spend time with his friend Lauren, who he doesn’t get to see much. “My favorite parts are when we get to go outside and play,” he said.

A national study done on the Big Brothers Big Sisters program showed spending time with their Bigs left Little Brothers and Little Sisters less likely to begin using illegal drugs and alcohol, less likely to skip school and less likely to hit someone. “We’re keeping kids out of trouble,” Bachert said. “It’s like have a favorite aunt or uncle tell you (that) you better be studying.”