From the Bottom Up: Scores Take a Jump 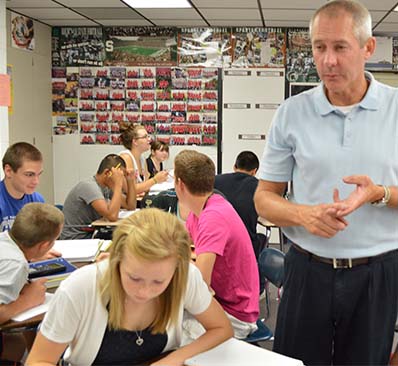 An increase in testing scores at Kent City High School, and a significant jumpin the state’s Top to

“In almost every category of the ACT we’ve seen a big jump,” said Bill Crane, principal of the high school and middle school.

The school also has the largest percentage of students receiving proficient or advanced scores on the Michigan Merit Exam in reading and math compared to neighboring districts of Cedar Springs, Sparta, Ravenna and Grant, and is above the state average in reading, writing and math, according to data from the Michigan Department of Education.  In science, scores were 25 percent proficient or advanced, which is 1 percent behind the state average of 26 percent. In social studies, scores were 37 percent, 2 percent behind the state average of 39 percent.

Also, 100 percent of the 88 seniors in the Class of 2013 graduated, which is rare to see, according to administrators.

Crane said the increases are significant because in fall of 2010, the high school landed on the Priority Schools list, indicating it was among the lowest achieving 5 percent of schools in the Top to Bottom ranking. The district spent the following two years on significant reform efforts.

“It was a pretty bad black eye for the community when we were on the list, so it’s nice to have something to celebrate,” Crane said. He attributes successes to increased collaboration among the staff, creation of a District Improvement Team, more unity between the high school and middle school, and a better all-around focus. “We’ve done a good job of putting everybody on board with how we are teaching and what our instructional model is,” he said.

Rankings are based on several factors, including student test scores, achievement gaps between student groups, and district demographics. Kent City is a rural community reliant on the agricultural industry withabout 60 percent of students district-wide receiving free or reduced-cost lunches.

“For high schools of, or near, our size in this area, Kent City’s ranking was at the top. That is quite a change from our rankings of 2010-11, which placed the high school in the 14th percentile, and is a considerable increase from our percentile ranking last year, which was 61,” Weiler said in a press release.

Kent City Middle School’s ranking in the 75th percentile was about the same as the previous year. Kent City Elementary was in the 63rd percentile, which was down from its 2011-12 ranking.