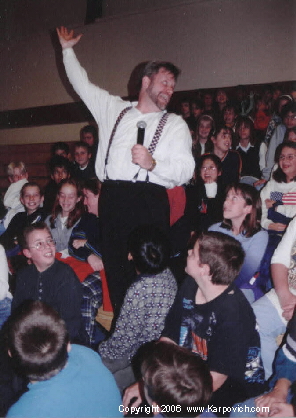 Michael Karpovich remembers his head being flushed down the toilet nearly a dozen times by bullies as a student, and he knows it continues to happen, both literally and figuratively.

“You’ve been flushed down toilets, too, but they may not have been porcelain,” said Karpovich, scheduled for two presentations on drug and alcohol abuse in the Thornapple Kellogg Schools Oct. 24, one during the day for students and another in the evening for parents. His visit to West Michigan also will include sessionsat Northview, Kelloggsville and Caledonia schools. They are sponsored by the Kent Intermediate School District Healthy, Safe, Drug-free Schools and Communities Coalition.

What he means by his comment is that for kids, things like swirlies are like fights with friends, bad grades, parents divorcing or even a favorite pet dying. The result sometimes is turning to drugs or alcohol or crime. They do this, he says, because they “don’t know how to deal with a crisis.” His advice is to take “these toilet flushings we’ve been given and turn them into something positive.”

Being a professional speaker is not what anyone would have imagined Karpovich doing in his younger years.  Born in Caro, Mich., his skull was crushed during a difficult birth. Doctors told his parents he was brain-damaged and suggested putting him in an institution. Instead, his parents quit their jobs (dad was a physicist and mom a bacteriologist), devoted themselves to raising him and proved the doctors wrong.

Karpovich was unusually short in school (4-feet-9 inches in ninth grade) which led to him being called a “shrimp” and “midget,” along with “weird,” “geek,” “nerd” and “retarded.” It was embarrassing, he said, but he “somehow decided this would make me better. I took those labels and allowed them to make me stronger.”

After winning an FFA speech contest in school, he got into public speaking and started giving speeches even before graduating. He went on to get a degree in psychology at the University of Michigan. Along the way, he realized he had a gift for talking to kids and, although he’s severely dyslexic, has gone on to a successful speaking career. He’s given his talks at every state in the nation and appeared on TV on the Today Show, 60 Minutes and Fox News.

He describes his presentations as part education, part entertainment. He’s had both geeks and the tattooed come up to speak to him after his talks, telling him about being victims just like he was. A few years ago, one girl wrote him a thank-you, saying she decided not to commit suicide after hearing him speak, he said.

The four classmates who bullied him the most as a kid aren’t around anymore, Karpovich said. Three were killed in drunk-driving accidents and one committed suicide. He sees three of their graves when he visits the cemetery where his father-in-law is buried. “They never had a chance to live a real life,” he said.