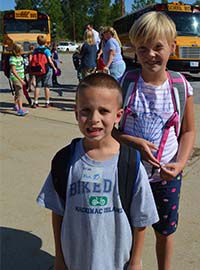 You’re a kindergartner. It’s your first day riding the big yellow school bus. Before you get home, you are going to be dropped off at a transfer spot with more than 1,000 other kids. And you have to find the right bus to ride home.

Sound scary? Yes. Impossible? No. The Caledonia Community Schools’ transfer system went so smoothly this year on the kindergartners’ first day it had a new principal gaping.

“This is unbelievable,” first-year Dutton Elementary Principal Shawn Veitch said as he watched the students get on their buses. “This is awesome to see.”

One of the keys to making it run like clockwork is a little white tag kindergarten and first-graders are given to wear. Written on the tag in blue, red, green or teal marker is the bus number the child will ride on.When buses pull into the lot, they line up to park behind different colored squares painted on the ground that matches the marker’s color. So if little Tommy’s tag has the bus number written in blue marker, he goes to the section where blue squares are and looks for his bus number. And there are lots of helpers if he has any difficulty.

Before Caledonia created the transfer system, they had buses criss-crossing more than 100-square miles bringing children to school.  With different buses from the multiple schools going to the same neighborhoods to drop off students, it was inefficient. The transfer method puts all those students from the same area, regardless of their school, on one bus.

Besides being well organized, the system has saved the district hundreds of thousands of dollars.  Director of Transportation Judy Truer said if they were still using the old system they’d probably have had to buy six to seven buses by now, at a cost of $50,000 to $70,000 each. Plus, she estimates the savings on fuel and drivers has been about $14,000 per bus route each year. 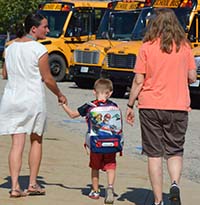 Getting kids home safe and secure is another benefit of the system, Superintendent Randy Rodriguez says. “We make sure everybody will be where they need to be,” he said.

With teachers from each school and bus drivers armed with bus lists helping the students, it was hard to find anyone having trouble locating their bus on the first day for kindergartners. Nolan Pike, 6, a first grader, didn’t seem at all concerned about not finding his No. 5 blue bus.  “I know what bus I go on,” he said matter-of-factly. For most students, the mob scene is no big deal, said Evie Schlett, 10. She even thinks it’s fun.

Parents, though, were leery at first of the transfer system, but Truer thinks that’s just because of concern about having to learn the system, which can be confusing to explain.

The first day this year, buses were 20 minutes behind schedule, which was expected, Truer said, but still a good start. On the second day though, even with the kindergartners added, the entire transfer was complete in just

“Normally they’re off and on within five minutes,” Truer says. “It’s amazing. They want to get to their bus and get home.”

‘Every child has their story’