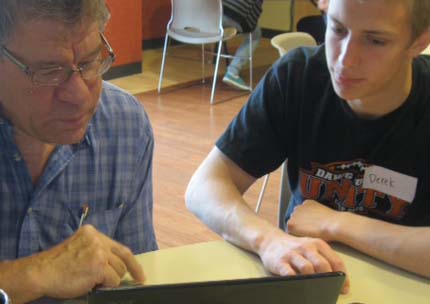 “Yeah, high five ya,” said Kamber, as Krol successfully located a Gulf Shores, Alabama, post office with her TomTom. “If you want to go to that post office, you are like, ‘bada bing, bada boom, yeah,” Kamber said. Next destination to locate: Tanger Outlet Mall.

“It benefits us because now we can use them,” said Byron Center resident Bernice Church, who received tips for using her camera from juniors Kennedy Nowicki and Nichole Nguyen. “I wish I had had one of these girls when I had my computer. I gave up on that thing.”

Tammy Kolenda, Byron Township recreation programmer, said the technology program is part of an ongoing relationship between the Community Center and high school students. Students have also hosted a prom for senior citizens and other activities.

The technology instruction helps fill a void, she said.“We had a lot of seniors asking about computers and we didn’t have computer classes,” Kolenda said. “It’s a great opportunity for multigenerational interaction.”

Students may be tech-savvy, but can learn a lot from the seniors. Cameron Glaeser, a junior, referred to it as reverse mentoring. “(Seniors) are usually the ones mentoring us about their life experiences,” said Cameron, who helped a Byron Center resident learn to get photos onto the photo app on an iPad.

After her session with Kamber, Krol said she felt ready to travel, her GPS indicating the route. “I think I can handle this,” she said.