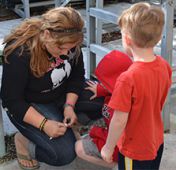 Caledonia’s FFA club’s strong leaders and a supportive community are big reasons behind the group’s reputation for raising good citizens and garnering dozens of awards over the years. “FFA really made me who I am today,” said Nathan Frahm, 18, an FFA state officer from Caledonia who remembers when he was once a shy kid. “I’ve taken a total 360 from freshman year. I do stuff now that really surprises even me.”

More than 150 district, regional, state and national awards have been won by the club since 1959. It will pick up more in November at the National FFA Convention in Kentucky. For the past four years, Caledonia students have competed at the national level. One of the awards the club will get this year is the National Star Chapter Award three-star ranking. To make it to that level, a club has to be in the top 10 percent of clubs in its state.

“When we go to regionals in the district, we kind-of are the team to look out for,” said Stacy Bender, co-advisor with John Schut for the club. “They want to beat Caledonia.”

Today’s members aren’t joining the club to just raise goats and sheep for the county fair. The club focuses on creating successful adults. Leadership, public speaking, how to run a meeting and how to be get involved in the community are part of what is taught, said Schut, who noted some of its members have transferred to Caledonia just because of the FFA club.

“There’s a lot of opportunities for lots of different students,” said the high school leadership, veterinary science and horticulture instructor.

“I’m in it because I know FFA changes lives,” said Bender, who was a student teacher under Schut and earned the NAAE Teacher Turn the Key Award for the top new teacher in the state a few years ago.  “It helps them grow in the classroom and outside the classroom. It’s a life-changing program.”

Alexandria Schut, 17, helped start an FFA middle school club, which is no surprise since her dad is John, the co-advisor. She said both advisors have “a natural talent to connect with kids,” and the kids get something that’s hard to find – one-on-one attention. She and two others will compete in the National marketing contest, with a marketing plan designed for Grand Rapids farmers markets.

Through FFA she’s made friends and contacts across the country. “The people I’ve met have been incredible,” she said. “I tell them I’m in FFA and they say ‘get in touch with me when you graduate.’”

The school’s first FFA club was started in 1936, but the members today don’t look a whole lot like they did then. Seventy percent of them are female, which is a national trend.  Most aren’t from farming families – only two of the nearly 60 members this year are from full-time farm families, said Schut. “It’s not just producing agriculture, it’s marketing, green industries, natural resources and environmental science, food science and more,” he said.

All of those areas fit in, because if it weren’t for farmers, people wouldn’t have clothes on their back or schools to go to, Bender said. “It takes an ag background for any of the careers you might chose,” she said.

Besides attending the national convention, other major club activities are a hog roast and a toy show (which includes a fun kids’ pedal tractor pull designed like a real tractor pull). “Usually FFA members know how to organize events. They know how to work with other people,” Schut said. 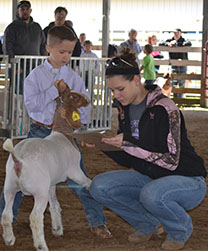 The group created an endowment fund a few years ago that gives out $500 scholarships, and the FFA boosters give out $3,000 to $4,000 in scholarships annually. Bender said one of the big reasons for the group’s success is the community support from businesses, families and administrators.

One of the stories Schut likes to tell is when former group member Dick Posthumus, who was the state president of the FFA at the time, went up against a guy named John Engler from Beal City in a parliamentary procedure contest. Caledonia won.  Engler went on to be the governor of Michigan, with Posthumus as his Lt. Governor.