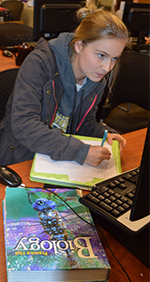 Maddi Saum hopes to become a physician. Jamasen DeKlein wants to get a job in construction or attend Grand Rapids Community College after graduation.

After falling behind in credits at school, they are redirecting themselves with help from the Comstock Park Career Academy. They are not only playing catch-up with high school graduation requirements, but putting their energies into the careers they plan to pursue. Comstock Park Public Schools’ new approach to alternative education is about thinking long-term, considering what comes after graduation and the jobs students will need to support themselves financially. A requirement, with some exceptions, is attending Kent Career Technical Center for training, certification or college credit in areas like culinary arts, health science, criminal justice and alternative energy.

Maddi, a senior, fell behind because of repeated absences due to medical issues. She said she realizes she must start working to become doctor. She plans to retake her ACT test to improve her score and is preparing with practice tests. She is taking a nursing assistant elective course online. After graduation she plans to attend Grand Rapids Community College, then a four-year university.

“I feel good about it,” Maddi said. “It’s really reassuring to know what I need to achieve my goal.”

Jamasen  attends the Applied Construction Program at KCTC and takes band and math outside of the academy. He will graduate with a Level 1 carpentry certification.

“I am a lot more caught up than I used to be, and my grade-point average went up,” he said. “The program made me realize that it’s just helping me prepare for a job.”

The goal is for students to learn a trade, be prepared for college or enter the workforce with skills for their chosen industry. Students must treat their schooling like a job, or they won’t fulfill the requirements. Every two weeks students are evaluated on employability skills, such as attendance, cooperation, respect, punctuality and staying on task.

“If I had seven absences in the first seven weeks, I don’t think I’d have a job anymore,” said academy teacher Angie Nowak. “We are kind of like their employers … yes, this is high school, but we are going to treat it like a business.”

Drilling home the importance of job performance is eye-opening. Dean of Students Chris Sposaro has sat down with students with repeated absences or other problems and said, “You’re fired.”

While they aren’t literally fired, he wants them to think about real-world consequences. “It’s going to be a long, unsuccessful life if you continue this way,” he tells them.

The academy replaced the district’s alternative high school, North Kent High School, which closed at the end of the 2011-2012 school year because of budget issues and the need for improved performance, said Principal Steve Gough.

Together staff determined the need for individualized instruction with a strong tie to developing job skills. Students apply for enrollment into the blended online and teacher-led program. Most are non-traditional learners.

“This is where I think education should be headed,” said Gough. “All students come with individual needs.”

North Kent High School operated in a traditional high school setting with 55-minute courses, but the academy is housed in two rooms in Comstock Park High School where two full-time teachers and a math interventionist lead students through the online Edgenuity program, formerly known as E2020. A typical day includes three hours at the academy and part of the day at KCTC. Some students opt to attend a seventh hour or come in early. Working from home is an option.

Courses are graded, but pace and productivity are more important factors, Gough said. Currently, 51 10th- through 12th-grade students are enrolled. There is room to grow to 60 students, and the program could expand in future years.

While credit recovery is the primary function, Gough said some students are enrolled because of the individualized pace allowed. The potential to graduate early is available.

The idea has caught on in a neighboring district. Sparta High School modeled its new alternative high school program after Comstock Park’s to replace Englishville High School, its alternative school that closed last June, said Doug Kleyn, Sparta Career Academy teacher. Sparta’s program includes about 60 10th- through 12th-graders who also complete Edgenuity courses and either attend KCTC or work at an internship at a local business.

Students at risk for dropping out come with a host of challenges, and many aren’t considering college as a possibility. Showing them the earning potential of learning a trade is very valuable, said Career Academy teacher Kim Pfeiffer. Sometimes a fifth year is needed for students to graduate.

He often posts information about in-demand industries and top jobs. “They are finally starting to realize they need to take care of themselves in a short time with or without a high school diploma,” Pfeiffer said.

Things look promising, Gough said. All students in the program scheduled to graduate last year did, and the program exhibited the highest growth data in the district on Measures of Academic Progress Scores.

Eight students who took ACT tests are opting to retake them this year. “That demonstrates a level of connection to career preparedness,” Gough said.