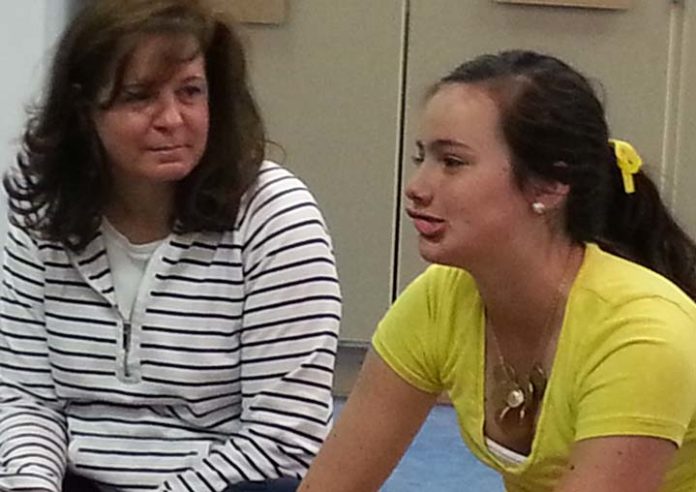 From the ability to make funny faces to their favorite birthday treats, it turns out middle-school students in special education teacher Jill Fouch’s Links-Connect class have a lot in common

The class, which pairs seven special education students with general education peers, begins each morning with Connect Chat, a chance to talk and learn about each other. On a recent Tuesday morning, Fouch read questions from cards for each student to answer.

“Ooh, this is a good one! Who likes to go fishing in your family?” she asked

Students paired off to work on creating well-balanced breakfast menus by cutting pictures out of advertisements while keeping the food pyramid in mind.

“He’s going healthy right now,” said Josh Rabideau, a student in Connect for two years, as he worked with Tyler Cornetet on picking out breakfast items. “He’s picking out Special K and oatmeal.” 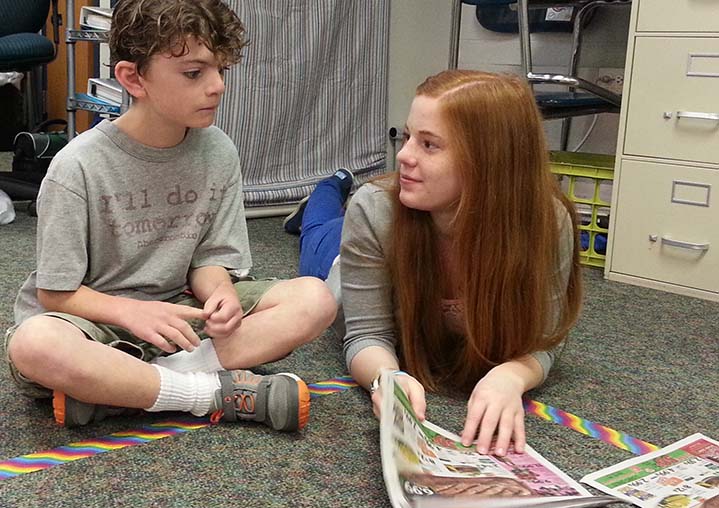 Connect, which Fouch expanded from a small group nine years ago, is a seventh- and eighth-grade elective that brings together students who otherwise wouldn’t have many opportunities to connect. A Friend Connect Club, open to all students, also meets after school for outings like bowling and sledding.

“There’s always a teachable moment,” she said.“There’s research that supports that this is just as beneficial to general ed students as my (special ed) students.”

More than 100 students apply each year for a spot in the class. Because of the popularity, the middle school offers four eighth- and two seventh-grade sections each semester, which meet on alternating days.

“The number of kids who want to be part of it just amazes me,” she said.

Before chatting, students work together on a chore like taking out the recycling.

Part of the school’s fabric

Middle School Principal Peter Stuursma said the program has become part of the fabric of the school and the sense that every student deserves a chance.  It’s that kind of compassion that makes events like the school’s recent Derby Day, a fundraiser for the Down Syndrome Foundation, hugely successful. Students and teachers alike wore T-shirts printed with the quote, “Calm Down, it’s just an extra chromosome,” and raised $1,500 for the association.

Fouch was recently named Teacher of the Year by the Down Syndrome Association of West Michigan.

Links-Connect also helps general ed students get to know the special ed students really well, said Fouch, and she hopes it opens the doors to more opportunities for students with disabilities to become independent in the close-knit community.

Student Emma Burke said she’s learned a lot over two years in Connect. Emma, who has Type One diabetes, said she knows how it feels to be treated like she’s different and has compassion for the special-education students as a result.

“I think the kids are different than the other kids in the school. They are always kind-hearted and have good intentions,” she said. “I’m going to miss them in high school. Even though they aren’t considered in my grade, they are part of the middle school.”

Ben Keller said he has worked with a student with Downs Syndrome who could draw scenes from the cartoon show “Blues Clues” “spot on.” Another student this year went three for three in a three-point contest.

“I like finding out their strengths,” he said. “They are all just really nice and always want to be your friend.”

Down Syndrome Association of West Michigan