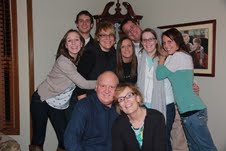 When Katherine Steelman headed off to the Fashion Institute of Technology in mid-August, she took more than a few suitcases with her to New York City.

As the sixth and last child in her family to graduate from Northview High School, Katherine also carried a proud legacy of academic achievement spurred by high expectations.

“All the teachers are saying, ‘What are we going to do without a Steelman in any school?’ “ quips Katherine, whose oldest sister, Kelly, graduated from Northview in 1997.

Actually, there will be one Steelman left in a classroom – Katherine’s mother, Sheridan, who’s taught high school English there for 41 years. And in a family that has produced nearly 20 college degrees, Sheridan is working on a Ph.D. at Western Michigan University. Her proposed dissertation topic: the role of plants in Shakespeare’s plays.

As well as the high standards of her parents, Sheridan and Robert, Katherine says Northview’s teachers prepared her well for the rigors of college.

“The teachers all had expectations that you get your work done when it’s supposed to be done,” Katherine says.  “If you didn’t, you lose.”

She continues a family tradition that at one point saw Steelman children in every grade level, from preschool through high school. Sheridan Steelman says the school system’s “whatever it takes” philosophy has served her children well.

“We’re on the cutting edge of everything in Northview,” Sheridan says. “I feel like my children benefited from that. I can’t even imagine them anywhere else.”

The Steelman tradition began when the family moved in 1988 to their home five minutes from the high school, where Sheridan has taught since 1972.

The parade of graduates began nine years later with Kelly, who has a Ph.D. In psychology and begins teaching this fall at Michigan Technological University. Since then have followed five more Steelman grads:

Trips abroad and what to call mom

Then there is Katherine, who shows no signs of tarnishing the tradition. Besides excelling academically, she has sung in choir, competed in softball and cross country, been president of the Fashion Club and took dual enrollment classes at Kendall College of Art and Design. She toured Europe with the band and took two other English department trips abroad led by her mother.

Being a Steelman brought with it extra academic pressure, she concedes. “Definitely the teachers who knew the rest of my siblings expect achievement and effort at least,” Katherine says.

She and three siblings had their mother as a teacher. Any extra pressure there? “I didn’t mind it,” Katherine insists. “She’s exactly the same teaching as she is at home.”

Sheridan says she noticed a little eye-rolling here and there, but the hardest thing for her children was, “What do I call her? Mrs. Steelman or mom? “

With lists and laughter, she’s ready to lead