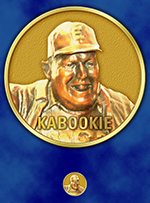 East Grand Rapids High School Principal Jenny Fee saw the spirit of Jimmy Gerken in Olivia Kallil, so she acknowledged Olivia’s kindness by giving her a golden coin. It was emblazoned with the smiling face of Gerken,  the man remembered as “Kabookie” by the East Grand Rapids community.

To keep Gerken’s memory alive, 1,000 golden coins are being handed out by district staff to students who show acts of kindness. “It can be big things, little things … going above and beyond and reaching out to others,” Fee said.

Olivia, a senior, received a coin for showing compassion and the ability to connect with people with special needs at school and through Special Olympics. At a recent assembly Fee also presented several other students with coins:

•   Josh Pittman, an autistic student who was crowned this year’s homecoming king

•   Kevin Schlick and Peter Stewart for their work done to honor Lakeside teacher Katie McIntosh, who has been battling breast cancer, during Lowell’s Pink Out football game against East Grand Rapids

•   Michael Kam, who began running to raise money for the Leiukemia and LymphomaSociety, and ran the society’s half marathon in Detroit 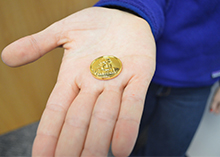 Today’s students never knew Gerken, a man with special needs who died in 2002 from complications with pneumonia. They’ve heard a lot about him, though, as the ever-present face at all school events, the person who rooted for every student, who saw the good in everyone. The district hosts Kabookie Week each February and a bronze statue of a waving, smiling Gerken sits in Gerken Plaza, the football field entrance.

The coins, with the face of Gerken on one side and the words “Spirit of Jimmy Gerken” on the other, were paid for through the East Grand Rapids Education Foundation’s Jimmy Gerken Fund, established in 2009. 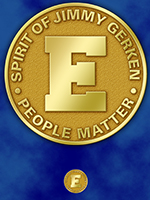 Olivia’s smile widened at the memory of how she first discovered her love for working with people with special needs. It started when she was paired with autistic senior Josh Pittman in physical education class in sixth grade. She recently helped Josh make his way to receive his crown when the school named his homecoming king.

Olivia said Gerken reminds her of people she enjoys helping. “He was also in the special needs category,” she said, noting the community looked at him as a regular person, “like I like to look at special needs people,” she said. 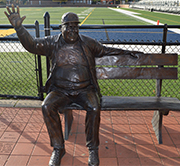 Fee thought of the idea for the coins, and realized the overlap they would have with the school’s annual Hearts of Gold fundraiser which supported the Mental Heath Foundation of West Michigan’s Be Nice campaign this year. Gerken embodies the message of both the community-wide effort to come together for a cause, and Be Nice, which educates students about mental well being, anti-bullying and the importance of treating each other with civility.