Football Bruising, Plus Singing and Doing the Right Thing 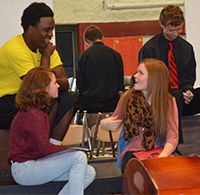 The Northview High School football team is on the field, practicing to prepare for its final game. But Tommy Brown stands on the sidelines, hands in his pockets, a sweatshirt covering his head.

A concussion sustained in the previous week’s game against West Catholic left him with a constant headache and knocked him out of action. The best he can do now is offer encouragement to teammates. “Gotta stay positive,” he says, while watching offensive drills. “Just keep everybody positive is my main goal.”

Positive is Tommy Brown’s way. Whether bruising bodies on the field orsinging soulfully in choir, the Northview junior is a quiet leader with a big heart, school staffers say. “He’s a leader on this team,” says Dion Charity, an assistant football coach. “The guys really look up to him, and he shows that through his actions on or off the field.”

Ask choir teacher Judy Pellerito about the student she calls “Downtown Tommy Brown,” and she puts her hand over her heart. “He’s a good boy,” Pellerito says. “He’s a hard worker. He’s kind-hearted. You would want your daughter to date him.”

He also has “an amazing man-voice,” she says – all 6’2”, 265 pounds of him. She recalls hearing his first solo, on the Leonard Cohen song “Hallelujah,” when he was a freshman. “Every time I talk about it, I get chills,” she says, getting them again. “He still doesn’t quite realize the instrument he has.”

Principal Mark Thomas recalls some students tossing an empty juice bottle around in the hallway one day. It hit the floor as Tommy walked by. As theywatched, he picked it up and dropped it in the trash can. “He didn’t have to

say anything,” Thomas says. “He politely modeled how to go about your business.”

He and others say Tommy has gone about his business admirably since coming to Northview his freshman year. He has done well academically, Thomas says, and is president of the school’s diversity club.

His athletic achievements speak for themselves. He recently was named all-conference in the OK Bronze division for his performance as the Wildcats’ offensive tackle, and has gained the attention of college football programs, including Michigan State and Western Michigan universities. He is a starting forward in basketball and throws the shot put and discus in track.

You wouldn’t guess such an imposing athlete was bullied as a youngster because he was chubby and smart. Sports helped him deal. “I used to feel lonely,” he admits. “I always felt like I could lean on sports, like the friend I didn’t have.” 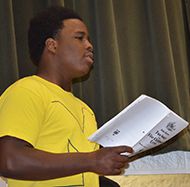 Tommy’s mother, Jane Brown, says those bullying experiences were painful for him and for her.  But she feels they helped shape who he is — a humble young man who empathizes with others’ misfortunes. “He was a brave little kid,” Jane Brown says. “What we went through paid off, and I’m very proud of Tommy.”

Tommy agrees the hard times were good for him. “I’m almost glad it happened to me,” Tommy says. “I don’t stand for bullying and treating people in a poor way.”

Despite the bullying, Tommy always found an outlet in the music that was all around his house. His mother received a vocal-music college scholarship and his grandparents sang in a gospel quartet. Singing in a choir is kind of like being in a family, Tommy says: “Making all the voices come together and be one voice – it’s something magical.”

Tommy sings bass in Northview’s Varsity Voices, a 24-member elite choir. He is one of two football players in the group, along with Damian Olson. Tommy amply fills out his concert tux, and Pellerito had to special-order shoes for his size 16 feet. “I was kind of nervous to let people know I sing because I was a football player,” he admits.

He credits Pellerito for bringing out his singing voice, which she calls “soulful” and “stunning.” Yet he has room to grow, she adds. “I don’t think he has the confidence in his voice yet, or the experience,” she says. “Those are things that are going to happen this year.”

Farther on, Tommy looks forward to college ball and a career in coaching or athletic training. “A lot of people are attracted to sports,” he says. “I want to impact their lives through sports.”