‘Hard Core with Lots of Love’ 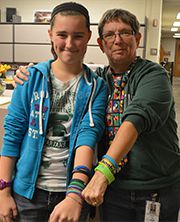 Roberta “Bobbie” Bentley entered the Halloween Bash dance-off and clowned around with the competition. Her moves were strikingly similar to the fifth- and sixth-grade boys. “I was just improvising,” said Bentley, Wyoming Intermediate School dean of students.

The fact that she was dressed liked a clown made it all the more entertaining. “It was hilarious,” said sixth-grade student Kymburly Burhans. “She’s funny; she’s crazy … she makes me laugh all the time.”

Bentley, who has worked in Wyoming Pubic Schools for 25 years, has the unique ability to balance discipline with caring and fun, say students and staff members. She’s tough but somehow students walk away knowing she cares about them. “She is hard core with lots of love,” said art teacher Shawn Dejonge.

Bentley leads areas of the school that aren’t usually known as fun: security, discipline and attendance. Her motto is to discipline with love and kindness. “That’s the whole thing: Love the kids, hate the behavior,” she said.

Bentley’s typical attire includes one of her 33 Looney Tunes ties and an armload of bracelets.

The ties are part of her more than 3,000-piece Looney Tunes collection, which includes everything from Daffy Duck and Bugs Bunny to mugs and glass figurines. “Because I’m a little looney,” she said. She ends all her correspondence with “Life is Good. Hug a Kid Today.”

Bentley was assistant principal at Jackson Park Junior High for nine years before retiring for two years and then returning as dean of students at the new Wyoming Intermediate School at the  request of Principal Kirk Bloomquist. Before becoming assistant principal, she taught ninth-grade science at Wyoming Park High School for 10 years. She coached volleyball, softball, basketball and was assistant varsity tennis coach. She was also the school mascot, Victoria the Viking, during boys’ basketball for a couple of years.

When transitioning from teaching to assistant principal she found it difficult to work in the area of discipline full-time, she said. “I had to go back to the classroom or fix it,” she said.

So she’s an authority figure who students know cares, who explains whyshe’s doling out a consequence for bad behavior and lets them know she expects better of them. “She’s only doing it because she cares about you,” said sixth- grade student Jeffrey Syscho.

She’s known at school for always having a handful of Wolf Tags. She greets students at the door each morning, shakes their hands and passes out the small square sheets of paper students can collect to buy Wyoming Wolves gear in the Wolf Den store. Staff members hand out the tags when they witness good behavior. Bentley gives them out along with the message, “Have a good day. Be good to somebody.’”

She and other staff members use the Capturing Kids Hearts model, created by The Flippen Group, to help students learn to recognize and display kindness, courage, self-control, forgiveness, respect, diligence, loyalty, honesty and confidence.

It’s also about noticing signs that something may be going on in a child’s life, affecting his performance at school. “You’ve got to capture their hearts before their minds,” she said.

A Walk Down the Hall

Every 45 minutes or so, Bentley walks the hall, popping into classrooms. “Hey, Bobbie, where’s our humor?” asks teacher Andrea Kiel as Bentley walks by. Kiel hasn’t yet received the joke or funny picture Bentley sends to staff members every Friday. Bentley says she will get to it soon.

Bentley opens the classroom door of a substitute teacher, making sure things are going smoothly in the absence of the regular teacher. She waits to see a thumbs up from the teacher if all is well, a half-way thumb if things are shaky, or a thumbs down if a student or two should accompany Bentley to her office.

The next stop is teacher Katrina Couch’s class, where the students are trained well. Bentley sets one foot in the classroom, they cheer. She steps out, and they stop. She steps back in, and they cheer again. She flashes the “I love you” sign in American Sign Language and is on her way.

“You’ve got to make your own fun,” she said.

The final stop is to recognize a class for their excellent attendance. She passes out Wolf Tags and hugs and congratulates them for being there all day, every day.

Teaching and athletics are in the Bentley blood. She grew up in a family of 11 children. Her father was a custodian in Wyoming Public Schools and seven of the children became teachers. Several of her nieces and nephews are teachers as well. Her siblings Rahn, Mark, David and Peggy all taught in Wyoming.

Growing up with seven brothers, Bentley learned to play football. She was a middle linebacker and offensive right guard for the Professional Women’s Football League from 1985 to 1987. Her team, the Grand Rapids Carpenters, won the National Championship in 1985. She has a championship ring.

Her brother Rahn Bentley played football for Michigan State University and her nephew Ray played professional football for the Buffalo Bills. Rahn made headlines in 2010 for being the first heart-transplant patient in Grand Rapids.

Principal Bloomquist said Bentley does such a good job with discipline that it frees him up to focus more on academics. “She does a wonderful job with the kids. If they break the rules, she will be the first one to let them know they broke the rules, but she will balance that with loving them,” he said.

Her role has had an impact. “The discipline has always been strong,” he said. “I believe our community sees the Intermediate School as a safe place to be. That’s because of her.”

Bentley also supervises lunches. Lead cook Diane Szczesny said “tough love” is a good way to describe Bentley’s approach. “I think she loves well but disciplines. She is firm, but she cares about each individual person here,” she said.

She also has high expectations for staff members, Szczesny said. “Honesty, integrity, she demandsthose things of people,” she said. “She’s supported, but really supportive, too, in so many ways.”