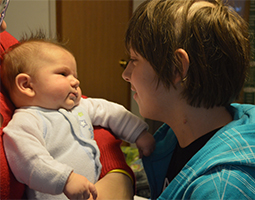 Some days it seemed hopeless. Here he was, a middle-school boy with a failing heart, stuck in a hospital and tethered to a 200-pound machine doing the work that his heart could not.

Devon Saliers admits he got pretty low at times, while waiting nearly nine months for a heart transplant that could save his life. “I thought I was never going to get out of there,” Devon said, his voice still raspy from a breathing tube that was in his throat at the hospital.

But Devon did get out of there. He received a heart transplant Aug. 1 in a 15-hour operation at C.S. Mott Children’s Hospital in Ann Arbor. He returned to his parents’ Rockford home Sept. 4.

And on Monday, Nov. 4, more than 11 months after being hospitalized, he came back to East Rockford Middle School. Hundreds of students gave him a hero’s welcome, lining the hallway and applauding. He walked between them with a shy grin, a 13-year-old boy just making his way to class but being treated like a sports star.

Teacher Angie Ohlman’s eighth-grade U.S. history students each shook his hand and introduced themselves. Then he took his seat, fat text book on his desk, finally back in class.

“It’s one more step towards normal,” said his father, Jon Saliers, after putting Devon’s other books in his locker. “It’s a good day.”

Devon’s road to that day began at birth. He was born with hypoplastic left heart syndrome, a rare condition in which the heart’s left side is underdeveloped and can’t sufficiently pump blood. He had three surgeries to correct the problem by the time he was 18 months.

Things went well after that, although Devon’s physical activity was limited, said his mother, Brittney Thurston. He couldn’t play contact sports, and running caused him to get light-headed and turn a little blue. But his half a heart seemed to be holding up, until last December.

That’s when Devon got really tired and lost his appetite. His side hurt as if he’d broken a rib. After a few days his belly bloated, and his lips turned blue. On Dec. 10, he was rushed to the DeVos Children’s Hospital emergencyroom. Doctors said he had congestive heart failure and needed a transplant.

The news stunned Devon’s parents and Dominic Thurston, his stepfather. “It came out of nowhere,” Brittney Thurston said. “We were just in shock.” 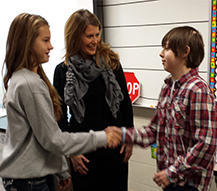 Devon was taken by ambulance to the University of Michigan’s C.S. Mott Children’s Hospital, whose Congenital Heart Center performs more than 850 procedures a year. Then began the stressful process of waiting for the right donor heart to match Devon’s young body.

In the meantime, Devon was connected to a Berlin Heart machine, a German-made device that supports children’s hearts until a transplant can be performed. The FDA approved the machine in late 2011 to improve the survival chances of children waiting for transplants.

Although it kept him alive via two tubes through his abdomen to his heart, the Berlin was a heavy nuisance for Devon. “I hated it,” Devon said. “It’s 200 pounds, and you have to push it everywhere you go.” Devon also had two hours of therapy a day, and did studies with an in-hospital teacher. It was tiring and discouraging, he says. He often wondered if he would survive, but he didn’t give up.

“I just worked harder, as hard as I could each day,” he said. “Just stay as healthy as I could without a full heart.”

It also was difficult for his mother, who stayed with him for most of his hospitalization and witnessed scary medical complications, such as blood in his lungs.

“It’s hard to see your kid in a situation like that,” she said. “It’s hard to not only comfort him, but to comfort yourself.”

Fortunately, comfort came from Rockford.  Students at East Rockford Middle School sent him cards, a video featuring students and teachers rooting him on, and a big banner signed by schoolmates. Students sold bracelets to raise money for expenses. Two teachers visited and a friend, James Bird, came by at Christmas. 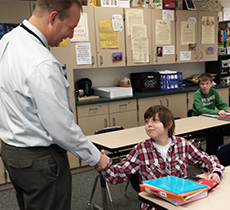 Those expressions of caring meant a lot to Devon, who feared people would forget about him, his mother said. “That stuff helped him a ton,” she added. “It made him remember he wasn’t forgotten.”

A New Heart and a New Life

Devon’s transplant surgery was long and complex but successful. He was scared beforehand, he says, but afterward “felt great.” So did his parents.

“Extremely blessed,” his mother reflected, “and overwhelmed that we were finally seeing an end to everything that he had gone through. He’s a strong kid.”

After returning home in September, Devon received tutoring from Linda Wessel, a district liaison for homebound students. Back at school, students wore red in his honor one day and made him a card in preparation for his return.

Devon was ready for it.  A few days before his return, he said he was excited about “getting in to see my friends, because I haven’t seen them in at least a year.” Or that’s how it felt, anyway.

He is easing back into school by taking a partial schedule and hoping to resume a full load by January. A school nurse will monitor his still-returning strength.

When full strength returns, Devon will be able to do more than he ever could before. That includes playing hockey, his favorite sport.

“He used to want to coach the (Detroit) Red Wings,” his mother said. “Now he wants to be a Red Wing.”

On the morning of Devon’s return, Principal Mike Ramm met with him and his parents before class.

“You have to know how excited we are that you’re back,” Rammtold him. “There’s going to be some challenges. We’ll get you through that.” 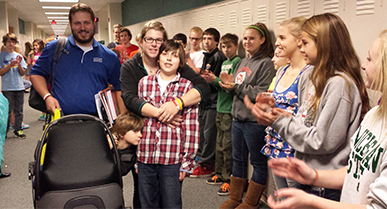 Jon Saliers marveled his son was back in school: “It feels amazing. Considering everything that he’s been through, we’re thankful for every day we’ve got with him.”

Upstairs, students lined up quietly and crammed the hallway bearing a banner that proclaimed “Welcome back Devon!” When he emerged from the elevator, they broke into applause.

It was a heart-warming greeting for a boy who, for the first time in his life, has a whole heart.