His Life is a Lesson 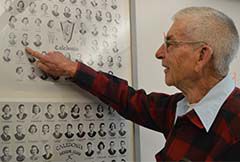 Roger VanLaan, 91, lives in a world he couldn’t have imagined when he graduated from Caledonia High School in 1939. And the students he recently spoke to in history class there can barely imagine the world he once lived in.

Dressed in a red and black plaid wool shirt, (which itself has been in and out of style several times during his lifetime), VanLaan took Jenny Jonkman’s class back nearly 75 years to a time of the Great Depression and World War II. Caledonia’s school system then consisted of three buildings, all of which have been torn down. “We had slide rules,” he said of the tool used for calculating in class. “They were as close to us as your cell phones are to you.”

How much education you needed to get by in life was different then, he explained. “In my day, you pretty much needed a high school degree to get you in most places,” he said. “Today, it’s a college degree.”

Jonkman, who is VanLaan’s great-grandniece, has asked him to speak to her students for thelast four years. “Prior to his visit, we take notes on WWII, watch video clips, read primary documents, etc., but Roger’s story brings history to life, far more than anything we do in the classroom.”

Hearing firsthand experiences from VanLaan “is one of the greatest history gifts I can give my students.” she said. One of those experiences was living when gasoline, meat and other foods, sugar and even shoes, were rationed according to government rules to help the war effort. “The rationed portions were not overly generous,” VanLaan told students who’ve grown up in a world of super-sizing.

Class Hears How It Really Was

In 1942, VanLaan was working at the Michigan State University dairy, bottling milk when a friend of his got a letter from the U.S. Army draft board. “We know who you are, and we know where you are,” was how they interpreted the letter, VanLaan said with a chuckle. Since he figured his draft number was coming up too, he and his friend joined the U.S. Navy. He would be paid $96 a week as a radio technician. That was a little less than the $110 he was making at the dairy, but with no room and board to pay and the free education, he thought it was the way to go.

His parents weren’t overjoyed with the plan. “Dad was kind of doubtful, but thought it was a good deal,” he said. “Mom thought maybe the war would be over by the time I got out of school. That didn’t happen.”

VanLaan, who lives in Fredericksburg, Md., today, had “never seen saltwater” when he went to serve in the Pacific on a destroyer escort that protected supply ships. His job working with radios was interesting to him, since that was “high-tech” at the time.  “In those days, ‘electronics’ meant radio and nothing else,” he said, adding that FM radio, the great grand-father of internet radio, evolved out of military technology during World War II.

Getting a letter in the service was a big deal in the war, VanLaan said, remembering a group in Caledonia that organized a letter-writing for servicemen. They “mimeographed” copies of the letter and handwrote addresses on envelopes, which students may never have done. “When was the last time you got a letter in the mail from a friend?” he asked.

But those stories don’t tell the ugly reality of the lives lost during the war. VanLaan saw the horrific event of a kamikaze pilot hitting the bridge of a sister supply ship, and wiping out all of the ship’s commissioned officers.

“I keep inviting him back and each year the students enjoy his story,” Jonkman said of VanLaan.  Shane Sumner was one of those students this year. “I was impressed on his ability to recount his life back then for a man of his age,” he said. “It was great getting to learn about the war from his perspective.”