If It’s Tuesday, Gramma Bobbie and Grampa Hank Will Be There 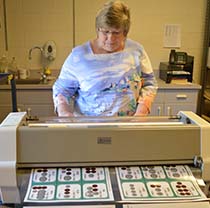 Bobbie Bulthuis remembers responding: “If we have to drive 45 minutes to get here, you have to take us for the whole day.”

Bulthuis and Hank Smoker, who live in Shelbyville, have been donating their Tuesdays volunteering at Wyoming schools every since. They spent the first four years at Huntington Woods Elementary. When the school closed, they began volunteering at Gladiola Elementary, where their granddaughter, Caitlyn Bulthuis, attended.

They have three other grandchildren, two who attend Wyoming High School, not to mention the 432 others at Gladiola and all the students they have worked with over the years. Their grandson, Matthew, first scrawled their names on the chalkboard as “Gramma Bobbie and Grampa Hank” at Huntington Woods years ago. The names stuck.

Shortly after Christmas they head south to Florida where they enjoy the sunshine and volunteer at an elementary school in SarasotaCounty, returning home in the spring

Bulthuis also spends time working on reading and sight words with teacher Sara Beld’s first-grade class and volunteering during kindergarten lunch. She recently sat down with first-grader Karla Munoz to read the book, “Dolphins,” and stopped to explain what “bottlenose” means.

“If it’s a bottlenose what are they talking about? Where did it get its name?” she asked, touching the nose of the dolphin illustration and then Karla’s nose. She told Karla about seeing dolphins in Florida.

Bulthuis, who attended former Wyoming schools, Rogers High School, Jackson Park Junior High and Rogers Lane Elementary, is retired from a truck expediting company. Smoker, who served in the Army from 1966 to 1968 and worked as a maintenance man for Canteen Services, was raised in Coldwater.

For them, volunteering is about supporting the community, lending a hand in a tough school-budget climate and serving as grandparent figures to  students.

“The rewards are seeing a smile on a kid’s face, and in a hug from them, because a lot of these kids don’t have interaction with their grandparents,” Bulthuis said. “It’s fun to see the kids grow from the beginning of the year to the end of the year, to see how much they have grown and matured.

Principal Craig Hoekstra said it’s great to have Smoker and Bulthuis in the building and to see students respond to them. They are individuals of all ages offering support. “It cements the point … that we have a great group of individuals in our community to help meet the kids’ individual needs,” he said.

Fourth-grader Matthew Schaefer has known Gramma Bobbie and Grampa Hank since first grade. “They help the kids,” he said. “Gramma Bobbie helps us learn stuff, and she makes all the copies with Grampa Hank.”

Para-educator Chris Berg said one of the most impressive things about Bulthuis goes beyond papers and books. “She’s a great cook,” she said, referring to the spread of broccoli cheese soup, decadent desserts and fresh salsa the couple provides for teachers each year.

Bulthuis said she loves the school community. “These teachers are fabulous to work for, and with Mr. Hoekstra’s leadership the school has blossomed,” she said.

How grandparents can support schools