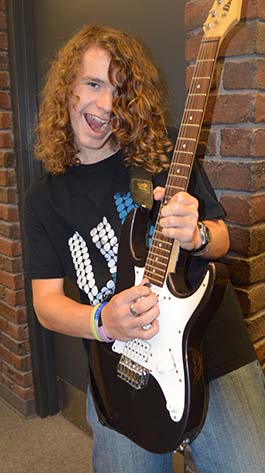 World War II for sophomore Zach Jones became something real when he met veterans who remembered it firsthand. It brought the history lesson to life in a way a text cannot, he said.

He and his peers from Kent Innovation High School and Kentwood’s Global Tech 21 program visited local veterans, who recounted the war and their personal experiences with it.After interviewing them, the group created documentaries and presented them to veterans and their families at a special Pearl Harbor Day.

The experience combined history and English, not to mention a valuable community connection.

“I felt like I got a lot more out of it, being able to talk about it with a person who was there themselves,” said Zach, who has a spot at the Kent ISD’s Innovation High School through Comstock Park Public Schools.

He cites the project as one of his favorite so far at the school, which was developed using a project-based learning model. Everything students do has a group, project, and community component. Students collaborate on projects that require teamwork and communication using technology as an important tool.

Students take what they learn and apply it in real-world connections, said Kym Kimber, Kent Innovation High School principal. “It’s not a sit and get,” she said. “We are 100 percent project-based.”

There are no textbooks. Everything is paperless. There is also a culture of trust and responsibility because students are accountable to their peers. If one student isn’t pulling his or her weight, the whole group suffers. “I love it. I feel like I actually learn a lot more than I would otherwise,” Zach said.

Kent Innovation High School recently started its third year with a new addition to accommodate the growing group of students. The facility, located on the Kent ISD campus near Knapp and the East Beltline, adds 100 ninth-graders each year until grades 9-12 are filled.  The school now enrolls 9th-11th grades students from all Kent County districts. A number of spots are available for each district.

It is part of the New Tech Network, a project-based learning network for schools. Based in Napa, Calif., New Tech supports 130 schools in 23 states and Australia.

The school serves as a demonstration site for New Tech, and is cited as an exemplary school within the network. Groups from all over have come to observe and learn how the model works.

Students range from gifted and talented to special education. Students accepted reflect the socioeconomic and ethnic composition of the area.

The term classroom doesn’t sound quite right for the learning environment at Kent Innovation High; “laboratory” is a better description. Students brainstorm in groups, experimenting with ideas and coming to consensus on projects.

During a recent morning, students paired up for a leadership activity leading each other through a “minefield” of obstacles while blindfolded. Others worked on videos, storyboards, and collaborated on pieces. As student David Shepard, from Caledonia High School, worked, he softly strummed his guitar.

That’s how Innovation High is: there’s a lot going on, and students are encouraged to learn in non-traditional ways. The rigid desks-all-in-a-row environment doesn’t exist. Students described themselves as “family” who embrace each other’s strengths. They said they work extra hard because they know their projects will be utilized in the community and seen by professionals.

“I’ve had a problem with school in the past,” said Sabrina Latham, a Caledonia student who began attending Innovation High with the original group three years ago. “It’s easier to understand and learn here.”

Second-year students Benjamin Wieringa, from Northview High School, and Eli Michael, from Forest Hills Central, are both dyslexic. They said the project-based model is much better suited to their learning styles and how they best express themselves.

“Sitting there and reading the whole time doesn’t work for me,” Benjamin said. “For me written expression was a real problem,” added Eli.

In line with state standards

Global Studies teacher Trevor Muir said the usefulness of projects can go far beyond a grade at the end of a semester. Last year, students met refugees from Rwanda and Lebanon through nonprofit organization Bethany Christian Services, during a unit on industrialism. They learned about the challenges refugees face in getting used to life in the United States.

Students created “how-to” videos on everyday activities like going to the library, using the bus system and cooking with American food. The organization now uses the videos to help orient refugees coming to this area.

Muir said that feeling of connection, of helping others through their work, is invaluable.

Kentwood Public School’s Freshman Campus Principal Michele Siderman sees a paradigm shift occurring as schools move toward a project-based or problem-based model. In the latter, students are presented with a problem and working toward a solution. “What project-based learning does is, it really requires kids to think,” she said.

Taking their own approach

On the Freshman Campus, Siderman and other administrators started their own project-based learning program, Global Tech 21, now beginning its fourth year. Kimber was an influential staff member prior to becoming the Innovation High principal.

Though administrators opted not to join New Tech Network, they gained ideas for their own version after visiting the Zebra New Tech High School, in Rochester, Ind.  We liked a lot of pieces of it,” said Michele Siderman, Freshman Campus principal.

But they wanted to adapt it to fit their own needs “in our own way,” without the regimen of New Tech’s curriculum, she said. This offered teachers more flexibility in choosing which content areas fit into a project and when they wanted to complete it. “There’s more freedom with what we are able to do here,” she said.

The Kentwood school’s projects also have community ties. Last school year, representatives from Grand Rapids-based Sip Organic Juice Bar taught students the organic chemistry involved in making their drinks and challenged students to create their own. Students shopped for ingredients on a budget and had to market their final projects to judges.

Between 90-115 students have been enrolled each year in the two-year program. An obstacle has been clearly defining what participation involves and just how different this approach is from traditional classrooms. While some students are unprepared for the depth and critical-thinking required to be successful in the program, Siderman said, administrators are focusing on identifying the right fit.

“The kids who do well with project-based learning love it. Academically they thrive, socially they thrive,” she said. “When it is the right fit, it’s incredibly positive.”

It’s not necessarily the same students who excel in a traditional classroom who do well at Global Tech, she said. It’s more the ones who can think outside the box, and come up with new ways to solve problems, Siderman said.