iPads Proving Their Value at Schools 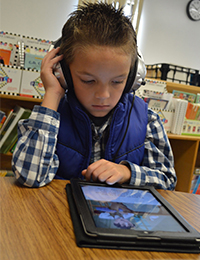 As Brown Elementary School kindergartner Christian Moomey got ready to record himself reading a story on an iPad, Principal Barb Johnson watched.  “It takes a little bit to load,” he told her. “Oh, here we go! Record,” he said, pressing the touch screen where an online book was open. “Carlos and his teacher talk … Carlos and his teacher work …” read Christian.

At Kent City Elementary School, you’ll find a similar scene of first graders with headphones on and fingers working the touch screen, as they pronounce letters appearing on their iPads.

Both districts are using the 1:1 method, which equips every student with a laptop or computer device for educational purposes.  In Kent City, iPads are being used to better engage students struggling in reading and math. Byron Center is testing how they would work at the elementary and intermediate school level.

In Byron Center, two classrooms in each of the district’s three elementary schools and five at Nickels Intermediate School, which houses fifth and sixth grades, have launched iPad pilot programs. The goal is to see how the iPads enhance instruction, said Kari Anama, executive director of instruction services.

Anama believes the possibilities are huge. Teachers plan to use the iPads for quick assessment of comprehension with online quizzes that track correct answers and to complete projects using Google Drive. Online programs like MobyMax allow students to work at their own pace and level.  “They are just at the beginning. The end goal is that big picture of changing the classroom so it’s more student-centric than teacher-centric,” Anama said. 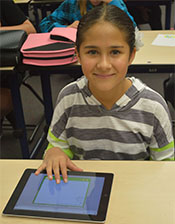 Fifty new iPads were purchased for Kent City’s intervention program, and school staff say the devices have brought student engagement in the group to a new level. Denise Boehm, intervention specialist at Kent City, has seen students reading an e-book online even though it’s available in regular book form on the library shelf. They simply like using iPads with reading apps and colorful moving pictures better. “The technology captivates them,” she said.

Boehm and teachers are finding for students who need intervention services, tablets help them stay focused and work at their own pace. While they still use regular books, students are more eager to learn on technology, Boehm said.

“I feel like they are so much more engaged than when they are doing it all together (reading in a group). They can go at their own pace, and it’s so much more fun for them than us talking to them the whole time to help them read,” said intervention teacher Monica Moore. 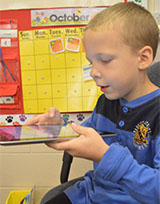 Intervention teacher Ryan Potter has seen how the iPads

help students learn words faster because the devices read words out loud and students don’t skip over them. “I find they are recognizing a lot of words they wouldn’t have tried before,” he said.

First-grade Kent City teacher Tracy Ferguson already had her 5- and 6-year-olds take photos with their iPads of things in nature for a science unit. They plan to create a presentation.

“I just think technology is the future, and the younger we get them started the better,”  Ferguson said.

Byron Center is in its second year of a 1:1 laptop program for seventh through 12th grade students, who each have a district-provided MacBook Air.  At  Nickels Intermediate School, all three sixth-grade math teachers are involved in this year’s pilot, so all sixth-graders will be using iPads in math.   “If this is where the kids are headed, why not learn about it right now?” said teacher Becky Hanson.

Sixth-grader Aleena Carter already prefers using the devices over textbooks. “I like the fact that it’s easier,” she said. “It’s more organized than flipping through a book and losing your page.” 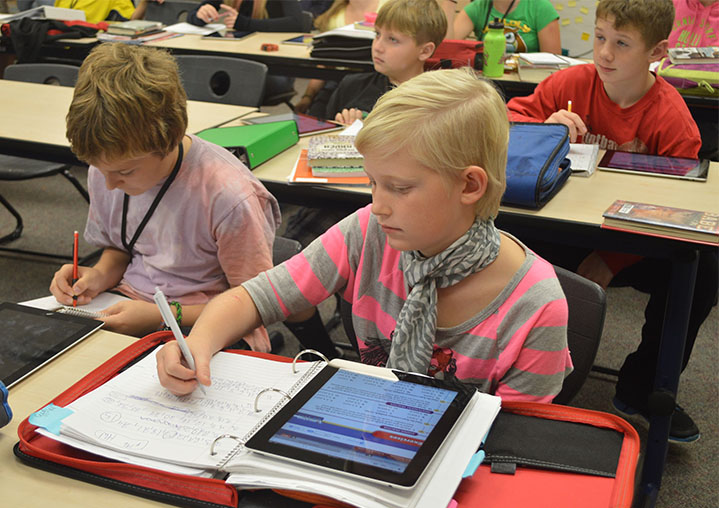 Kent City’s iPads were paid for with federal Title 1 funds, earmarked for services for students at-risk at failing to meet state standards. Byron Center’s MacBook Airs and iPads were funded through a $23 million bond issue passed in 2011.