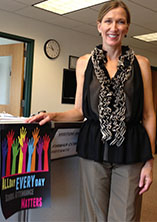 Gina Kuyers worries every time she sees an empty chair in a kindergarten classroom. Why be  concerned with absenteeism at such an early age?  Because there’s a higher statistical probability that that child will not graduate from high school, she said.

The Godfrey-Lee school psychologist  has spent most of the last four years developing and putting in place the “All Day Everyday” initiative to ensure all students at Godfrey-Lee Early Childhood Center, which includes  kindergartners to second-grade students, show up for school every day, on time and stay the whole school day.

“For urban, low-income students, which is exactly what we have, each missed day of kindergarten increases by 7 percent the possibility that a student will not graduate from high school,” she said, stressing the importance of “all day” and “every day.”  “Coming late and leaving early is a huge problem.”

This year, Godfrey-Lee launched the “All Day Everyday” public campaign, which includes billboards and posters throughout the community, district buildings and neighboring Wyoming school districts. During the first week of school, Kuyers organized a kickoff to get the information out to students, teachers and parents about the importance of sending children to school each and every day.

Kuyers said as student absenteeism has dropped at ECC, educators have seen considerable improvement. Five years ago, she tested about 10 students amonth for special education. That’s dropped to two or three, a 70 percent reduction. From 2010-2011 to 2011-2012, they also saw significant changes in other areas.

“Not only did we have less referrals, but ECC was also recognized for beating the odds for outperforming predictions based on demographics.” she said. “Reducing behavioral and learning issues has had a huge impact. We’re making unexpected progress.”

Many Tiers in Program

Kuyers said when she started developing the program four years ago different tiers were built in, including information, early and holistic intervention, and timely and meaningful consequences for those not keeping up with the program.

If a student starts missing school, a group of teachers, counselors and a social worker will meet with the student’s parents to determine what might be causing the absenteeism. Issues can vary broadly and may include lack of transportation, physical or mental illness, toileting issues or social adjustment issues. Whatever puts the child at risk of missing school, it’s discussed during the meetings and used to develop intervention plans.

Kuyers said they’ve been working with parents and staff to create a supportive and positive environment. Because they work with Kent School Services Network, they also are able to help families with housing, transportation and counseling.

Parents Given Lots of Support to Improve

Despite these efforts, students’ behavior might not change, and timely and meaningful consequences are required. The district has developed a close relationship with the Wyoming Police Department to hold parents responsible if a child continues to miss school despite warnings and citations. Last year, one parent was charged with contributing to the delinquency of a minor by the Wyoming Police Department, which is still working with the parent to correct the situation. The maximum penalty for the misdemeanor is a $500 fine and 93 days in jail, but that’s never happened.

Wyoming Police Lt. Scott Beckman said parents who remain non-compliant with getting their children to school and fail to appear at a meeting with school officials receive a letter and are scheduled to meet with the team one final time. If they do not appear and remain non-compliant , the case is given to the school resource officer and a warrant from the city attorney is requested.

“If it comes to us they have definitely been given every possible solution and access to assistance you can imagine,” said Beckman, who heads Wyoming’s Police Services and Support Services Division. ‘We would prefer not to look at criminal charges against parents,” he said.

Beckman said the department becomes involved when all other motivators to get parents to cooperate have been exhausted. “It takes more than a couple people to keep these kids in school,” he said, “and we want to make sure they have the best opportunities.” 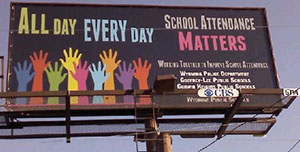 Truancy starts young and preventing the problem is much easier than turning it around, Kuyers said. “Getting them early is crucial to change the dynamics. When a child is physically as big as the parent, and patterns have been learned, changing dynamics is very difficult,” she said.

“We need to see that kindergarten is already critical to get students in school, or it’s very likely they will end up in the criminal system later on,” Kuyers said. “We wouldn’t allow a student not to make progress in reading, but somehow we’ve allowed them to be in school and attend part-time. We thought if they didn’t fall too far behind, it was OK. It is not.”

All Day Every Day