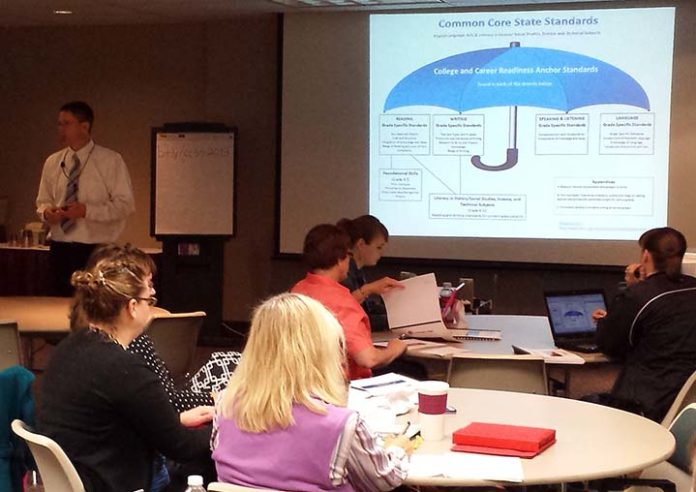 The Common Core is coming, so get ready.

That has been the message across all 20 school districts in Kent County for three years. Thousands of teachers have been trained in the new educational standards as districts prepare to implement them next fall.

But a loud screeching sound out of Lansing is putting the brakes on districts’ plans. Prompted by worries of a federal takeover of local control, the state House voted May 28 to prohibit funding of the Common Core Curriculum State Standards and related assessment tests unless the Legislature affirms the standards. The state Senate did the same Tuesday, when it passed a budget containing similar language.

Rep. Tom McMillin (R-Rochester Hills) insisted the move was only a “pause” to allow Michigan citizens to “weigh in” on the standards. But school officials said the vote throws confusion into districts’ preparations to implement reading, writing and math benchmarks adopted by 44 other states and the District of Columbia.

“In our state, we’ve built up the momentum” for implementation, said Kevin Konarska, superintendent of Kent ISD. “Now this is going to be a step backwards for everybody, but we’ll see where it goes.”

Konarska, who chairs a leadership committee for the Michigan Association of Intermediate School Administrators that worked with the new standards, held out hope an agreement to fund them can be reached before the budget takes effect Oct. 1.  But even if it’s not, it won’t necessarily stop schools from implementing them, he added.

“Regardless if they choose to defund it or not, if our local school districts deem it the right work they’ll continue moving forward with it,” Konarska said.

State Superintendent Mike Flanagan also hoped for an agreement before the Senate vote, calling on the full Legislature to “do the right thing” and restore funding. Flanagan insisted the public had plenty of input before the Common Core was adopted by the State Board of Education in 2010.

Other states that year began adopting the Common Core, which was designed to improve the performance of U.S. students and replace differing state standards with a common set of educational goals and expectations. Math and English standards already are in place; those for science and social studies are in the works.

The standards were developed by the National Governors Association and the Council of Chief State School Officers. Though they have been endorsed by the federal government, it was not involved in their development, officials say.

Concerns the standards are being foisted on states by the Obama administration, will weaken local control and are not well-written, have fueled opposition even among states that previously adopted them. Indiana recently halted implementation to allow more hearings. A fewother states also are reconsidering them and the Republican National Committee has opposed them.

But other Republican leaders back the standards, including former Florida Gov. Jeb Bush and Michigan Gov. Rick Snyder. So do the National Parent Teacher Association, the College Board and the Business Roundtable.

Konarska says trying to inject politics into the discussion is “a huge mistake. It’s not a political agenda,” he says. “It’s doing the right thing for students.” 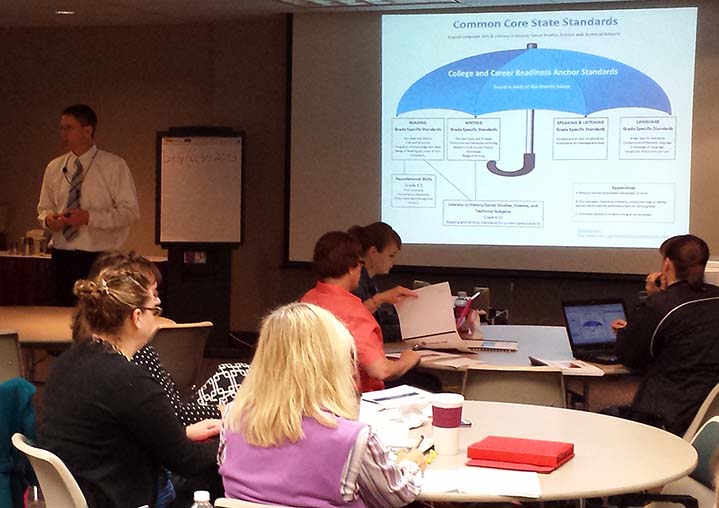 Educator advocates say the standards will better prepare students for college and career with more rigorous, in-depth course work and by bringing U.S. expectations up to international benchmarks.

“(T)hey have the depth, process, critical thinking and problem-solving skills that are critical components to students learning,” said Sara Shubel, superintendent of East Grand Rapids Public Schools. “We believe that the Common Core standards delve deeper into the content area which allows students to gain a greater understanding.”

Delving deeper into fewer subjects, rather than the broader and shallower approach favored by most U.S. schools, is a key component, said Dorothy VanderJagt, director of teaching and learning for Kent ISD. So is a greater emphasis on analytical thinking, informational literacy and a coordinated progression of K-12 course content.

With Common Core students will learn more consistently no matter which district or state they live in, VanderJagt said.

“We’re competing globally, not only for skills but for jobs. So we need to have these kids throughout the United States prepared to compete.”

Though the standards define what students should know at each grade level, it’s up to school districts to design curriculum. Kent ISD has conducted workshops for more than 3,000 teachers, helping them learn the standards and devise teaching strategies.

Superintendents and curriculum specialists from the state’s ISDs collaborated to develop model teaching units, which local districts can tailor to their students’ needs. Konarska has played a key role as chairman of the intermediate districts’ Instructional Leadership Committee, which has helped lead the Common Core implementation statewide.

Gearing up for change

Many districts have held extensive training sessions, including Northview, Rockford, Comstock Park and Wyoming. Some have begun folding the standards into their planning and lessons.

Teams of East Grand Rapids educators have been working on Common Core implementation for three years, Shubel said. Core standards already have been aligned with the district’s math and English programs, she said.

Raffler and other presenters stressed the standards move students away from rote memorization into deeper thinking. Teachers in different disciplines will have to break out of their “silos” to work together to educate the whole child, they said.

Teachers talked about the challenges of putting those principles into practice. Mary Dalton, a special education teacher at Comstock Park, said teachers are well-intended but questioned whether many would “really commit to the change at the level they need to.”

“I’ve done a lot of training on this,” Dalton said during a break, adding her English department had previously put in a four-day session. “Everybody (there) is on board.”

Moving ahead despite uncertainty

For now, the state House voted to defund the Common Core leaves districts facing questions. One is whether districts will still plan to administer the computerized Smarter Balanced assessment tests, being designed to align with the standards, in spring of 2015. Those with sufficient technology may do so but others don’t have the money to upgrade, Konarska said.

He worries this could be another instance of “reforming the reforms” that Michigan teachers and administrators have seen too often.

“That sends a message to them: ‘Why should we get excited about change when it’s going to change in a couple years anyway?’”

If the Legislature does not restore funding, will all the time and effort spent preparing for Common Core have been a waste? Absolutely not, said East Grand Rapids’ Shubel.

“Whenever staff has the opportunity to work collaboratively on curriculum, instruction and assessments, (which) has the potential to positively impact student learning, it most certainly cannot be viewed from a negative perspective,” Shubel said.

Konarska agrees. Districts aren’t going to eliminate the best practices at the core of Common Core, he insists.

“Just because the defunding has occurred isn’t going to cause districts to stop improving what they do in the classroom,” Konarska said. “I believe people will continue to do what is best for kids.”

For more information on the Senate vote, go to this story on MLive

Click here for Ron Koehler’s column:  Can Common Sense Save the Common Core?