Middle Schooler Builds Memories, Relationships in France Back to Back Program 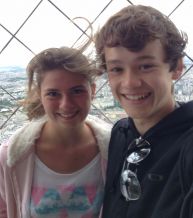 Ask David Tay about the high points of his trip to France, and he’s liable to bring up the Eiffel Tower right away.

“Just imagine being in a skyscraper, but without walls or a ceiling, just a floor to stand on,” says David, who went to France in June with 18 other students from Northview’s Crossroads Middle School. “The top is basically like an open balcony, hundreds of feet in the air.”

Soaring nearly 1,000 feet above Paris will be a lasting memory from David’s exchange experience with students from France. David’s family hosted Benjamin Lhospice, one of 23 students from Marseille, in April as part of the French Back to Back program at Crossroads. Coordinated by teacher Kathy Williams, the program

then sent 19 Northview students to stay with the French students’ families in June.

Judging from David’s assessment, the exchange was a smashing success. “I had a ton of fun over there, by far the coolest thing I’ve ever done,” David says. “It really opened my eyes to how people from other countries are really just like us.”

One notable exception was his French hosts’ mastery of English compared with his French skills, David admits.

“I felt really dumb over there because when the French students were here in America, they had to talk to us in English, but over in France I didn’t know nearly enough French to be able to communicate in French.”

David says most French people he spoke to knew at least a little English, and one of his host family’s daughters also knew Spanish and German. U.S. students should up their language skills, he says.

“Kids in America would really benefit from being required to take a second language in school,” he says. “I was embarrassed that when we would go shopping, we would expect the shop owners to be able to talk to us in English, which most of them were able to do.”

other daughter, Raphaelle, about “whose country was better or whose language was harder.” He also loved the father’s homemade crepes, but you can almost see him wince as he describes duck liver on crackers.

“They didn’t tell me what it was until I finished eating a sample of it. Duck liver reminds me of hard-boiled egg yoke… except it was grey.”

Yucky duck liver aside, David doesn’t want his Back-to-Back experience to end here. “Leaving was very sad, but I promised Benjamin I would come back some day and I plan on keeping my promise,” he says. “Best experience I’ve ever had.”