No Debate About it: Debating Skills are Valuable 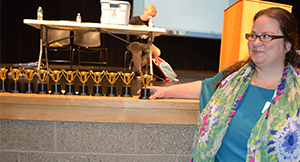 The mere idea of debating on stage may cause some to break out in hives, but students are usually far from tongue-tied by the time they take their spots behind the podium, say local high school debate coaches.

Student debaters must be well-versed on all sides of an issue before they are prepared for competition and those research skills are valuable for just about any career — not to mention everyday life, Harrigan notes. “It teaches them to really research and understand a position,” he says,

An Effort to Grow Debate

“The purpose is to build a community of curious and scholarly students who love learning and love a challenge and love the intensity of policy debate,” says Ellen Zwarensteyn, teacher and director of debate at East Kentwood High School. “I hope they fall in love with debate.”

Zwarensteyn says debate experience increases vocabulary, translates to higher test scores and even leads to better behavior. East Kentwood has a long history of state champions, and has both an elective debate class and a competitive team which will debate in 12 competitions this year. The partnership with MSU is part of an effort to increase debating events in Michigan.

Coach Taylor Sanchez, an East Kentwood High School 2011 graduate, says her experience on the debate team in 10th through 12th grades, taught her how to better express herself. “I learned how to communicate my thoughts effectively,” she says.

Northview High School sophomore Tyler Nichols says he hopes debate will help him toward a career in politics. “It’s really helped a lot,” he says of Debate Day. “I was a little unsure about how a debate worked. Now I’m more comfortable with how to do it.”