OK, We’ve Heard About the Big ArtPrize Winners. Now Let’s Meet Two of the Smaller Ones 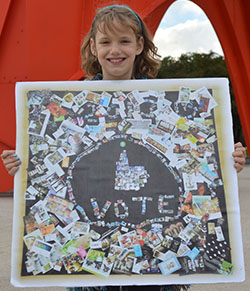 Rhianna Peterson of Rockford and Emma McCloud of Byron Center were winners in ArtStart, a new online competition for artists younger than 18. They were among 10 area students from first through 11th grade honored for their works, which ranged from painting and sculpture to musical composition.

ArtStart required entrants to express three elements of ArtPrize based on their experience of the event this year. Rhianna Peterson took that theme and ran with it – or rather, walked around ArtPrize with it for nine hours to gather her material.

An Art-Filled Work of Art

Rhianna and her mother, Heather Zigler, make an annual mother-daughter tour of ArtPrize. This year they got more intentional about it once Heather learned of the ArtStart competition. They spent seven hours one Tuesday seeing all the major venues, then returned with friends to explore some of the lesser-seen sites.

Rhianna gathered the postcard-size handouts many artists provide for their entries, and took 271 pictures of those that didn’t have any. She assembled the pieces into a collage of tiny art images surrounding the word “vote” and a thumbs-up symbol.

She titled the piece “Art in Art in Art in Art” to represent the many layers of making art out of art. She added another layer by making a poster of the original, which is spread out on her sun room at home.

Rhianna, who has taken classes from Kendall College of Art and Design, enjoys the freedom artistic expression affords. “My favorite thing is no one tells you what to do,” says Rhianna, a third-grader at Valley View Elementary School.

“She’s always said, ‘When I’m 18 I’m going to be in ArtPrize,’” her mother says. “I thought this was a fun way for her to get involved beforehand.”

So what was it like entering ArtPrize as an 8-year-old? Rhianna doesn’t mince words: “It’s fun, nerve-wracking and scary.”

examining the elements in other ArtPrize pieces.

Encouraged by her mother to enter, she drew inspiration from elements found in three entries located downtown this year. The woman’s fiery hair color comes from “Awakening Ophelia; Nishikigoi Dream,” by Elizabeth St. Hilaire Nelson; the face from “The Owlets Nested in Her Hair, but She Didn’t Mind at All,” by Meegan Flannery; and the hair from “Seven Deadly Sins,” by Sarah Ross.

Emma, an art student in teacher Janine Campbell’s after-school class, said her specialty is drawing and shading. She toured art prize to see the pieces which inspiredher

Several of Cambell’s students entered ArtStart. The deadline required a quick turn-around for their pieces, she said.

“She really had to work, work, work to get it done,” Campbell said. “I’m super excited for her.” Emma said she may pursue a career in graphic design, and sell art on the side.