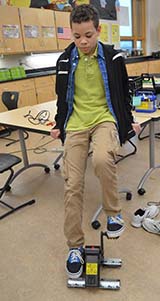 Electricity costs Byron Center Public Schools 11 cents per watt, Zoey Christensen explained as Jordan Whitmore pedaled away on an energy-producing box. If Jordan pedaled for an hour on the box, she said, it would create enough energy to charge a student’s laptop, which every student in her school has.

“Ever since we got the computers, kids have been charging them every hour,” Zoey said.

Students at the school each received MacBook Air laptops from the district at the start of the school year, and many didn’t understand the energy-savings feature of the computers. Eco Challenge team members  informed their peers how to optimize the laptop battery, and purchased two human-powered generators from K-TOR, an innovative technology company. The boxes, which cost about $100 each, were paid for with funds from the Parents at West group. It takes about one hour of pedaling to charge a computer from 0 to 100 percent.

A Record of Projects Making a Difference

The team of eighth-graders has entered  the contest several years in a row, completing projects on rainforest preservation, invasive species removal, going paperless and revamping the school’s recycling program. In 2010-2011, the team won $10,000 by raising enough funds to buy rainforest land to completely offset the Middle School building carbon footprint. It won again in 2011-2012  by implementing new school recycling efforts and partnering with the community to promote the benefits of passing the bond so the building could become paperless. The school is now almost completely paperless, said Justin Vande Pol, science teacher and team adviser.  The team also wrote a bill to send to U.S. Rep. Justin Amash (R-Cascade Township) banning idling cars in Michigan.

Jordan said he has learned through Eco Challenge how “a group of 10 kids” can make a big difference.

They also are learning how science can be applied to real-world problems through student-led projects. “I thought it would be really fun and a really good way to help the community,” said team member Ashley Cyrus.