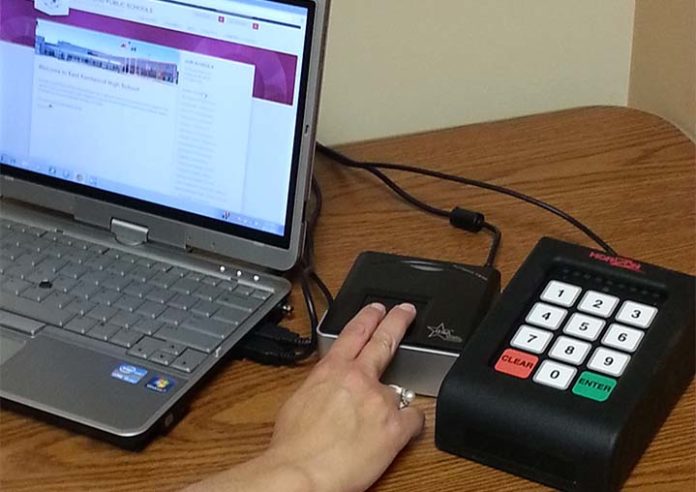 Buying lunch at Kentwood Public Schools will soon only take the press of two fingers on a scanner. A new biometric system, being phased in at schools this year, means faster-moving lines, more time to eat and fewer delays.

Every second counts in creating an efficient meal-service process that allows adequate time for students to finish their meals, relax and enjoy time with friends, said Food Service Director Mo Shamali. “The kids are savvy, technology savvy. This is another thing geared toward them,” he said. The district began a pilot program last year at Crestwood Middle School using the scanner to move students through the lunch line. Students were eager to try it, he said.

Christy Haven, Kentwood Child Nutrition Services supervisor, said it’s already sped things up during the 30-minute lunch period. “The length of time for seventh and eighth graders (going through the lunch line) was cut down by a third,” she said. “When you are talking about feeding 200 kids, 10 minutes is huge.”

To purchase meals, students press on the scanner, and the swirls and lines from their fingers are used to take biometric measurements which are used to identify them, said James Bryant, technology project manager. No image of the fingerprint is stored. The technology calculates a pattern and matches it to a number in the system using advanced encryption.

Parents can opt out of having their child add their information. Haven said parents of just four of 660 Crestwood students chose to opt out of the program.

The scanner replaces having students enter their six-digit student ID number for payment. Shamali said the system eliminates the problem of forgotten numbers and sharing of numbers. It also maintains student privacy concerning whether they receive free or reduced-price lunch.

The scanners will be added to all district elementary and middle schools and East Kentwood High School during the 2013-2014 school year, Shamali said. Purchased through Horizon Software International, they cost $450 each and 33 have been ordered for the district. Students register (with parent approval) by entering their biometric measurements and information the first time they press on the device.

Shamali said they first began discussing the idea in 2000 with experts, and consider themselves on the cutting edge of technology. The district was also one of the first to use a computerized point-of-sale system for lunches.