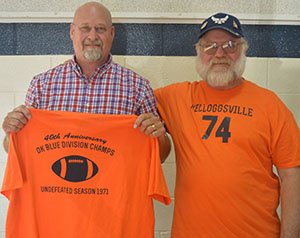 But the memories go deeper than wins and losses, they said. “The relationships that we made here are ones that will last a lifetime,” said Bolhuis, of Hudsonville, who also served as a football coach. “I definitely would not miss a night like this.”

Several dozen and players and coaches from as far back as the 1940s stopped in East Elementary School for the celebration, held prior to the high school’s game against Hopkins High School, which they attended together.

Kelloggsville Athletic Director Bruce Foster said the celebration was a way to honor a strong tradition of football. Since 1938, the team has had 16 championships. The Rockets have qualified for playoffs five out of the past six years and won one conference title.

“They are bringing their Rocket pride with them even after all these years,” he said.

Coach George Ewing, varsity coach in the ‘70s, said he loved seeing his former players. He recalled “the memory of a lifetime” as beating Hudsonville High School for the league championship.

“We had kids that had the pride of Kelloggsville. Tough, hard-hitting kids that loved football,” said Ewing, of Byron Township.

Ed Dyer, an All-Conference linebacker who played on the undefeated1971 team, went on to be a Kelloggsville coach and longtime teacher. He retired from teaching three years ago. “This makes you proud that the school’s still here. It’s still vibrant. It’s a good community,” he said.

The small school meant lots of playing time, said Dyer, of Alto. “We didn’t have very big teams as far as numbers. In 10th grade, I never sat a second of the season,” he said. Mostly, it was “just a lot of fun. “These are the things you remember,” he said.