‘Schools and Guns Don’t Mix’ – Except Under Michigan Law 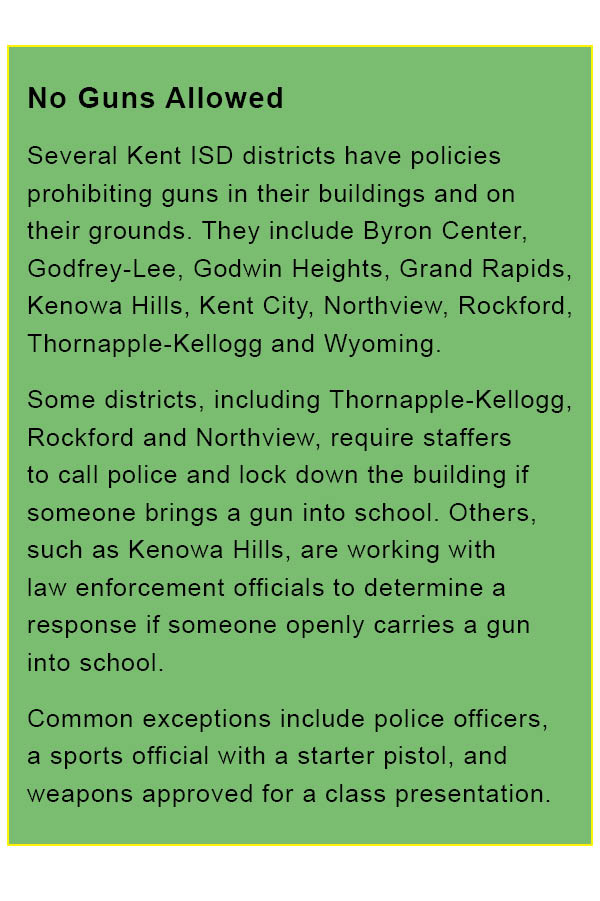 Like many residents in his largely rural school district, Superintendent Tom Enslen enjoys deer hunting. He has fond memories of hunting near Kalkaska and other woodlands with his two sons and daughter. But if you try to enter one of his schools with a gun, he will stop you cold.

“I’m a Second Amendment guy, totally believe in it,” said Enslen, head of Thornapple-Kellogg Public Schools in Barry County. “But I’m sensible in my approach. Schools and guns don’t mix.”

Enslen is joined in his conviction by school officials across the Kent ISD and beyond. They are pressing state legislators to close a loophole in Michigan law that allows concealed weapons permit owners to openly carry their guns into school buildings. But despite an upsurge of outrage among educators, the Legislature so far shows no sign of changing the law. A bill that would do so has languished in committee for nearly 10 months, and school officials find themselves up against counter-pressure from gun-rights advocates.

As the first anniversary of the Dec. 14, 2012 Newtown, Conn. school massacre approaches, school officials say change is overdue. The Rockford Public Schools Board of Education recently urged legislators to amend the law, while leaders like Enslen vow to keep their schools gun-free whether lawmakers vote in changes or not. “A gun is a threat to me, my employees and students we serve,” Enslen said. “I have every right to protect this property and those who are on it. I frankly don’t care about everything else.”

Enslen and other leaders want the Legislature to fix a quirk in Michigan law that prohibits concealed weapons in schools, but permits openly carried guns.  The loophole threads its way through a confusing cluster of laws. The state’s concealed-weapons law prohibits people with permits from carrying concealed pistols into schools, day care centers, bars and other venues. Its penal code bans the possession of weapons in many of those same places – but exempts people with concealed-weapons permits.

Adding to the confusion: One section of the penal code declares schools weapons-free zones, while another section leaves schools off a long list of gun-prohibited places. But both exempt concealed-weapon permit holders. The upshot is that in Michigan you can carry a gun in virtually any public place as long as you have a concealed-weapons permit, says Rep. Andy Schor, D-Lansing.

“The big joke around here is that in the Capitol you can’t carry a sign but you can carry a gun,” said Schor, adding a man carried a pistol into his office at a gun-rights rally. The reason, Schor says, is that when lawmakers in 2001 passed “shall-issue” legislation, requiring gun boards to approve concealed-pistol licenses to those who meet certain requirements, they designated schools and other places off-limits to concealed handguns. However, they did not specifically ban openly carrying weapons in those places.

Last January, Schor sponsored a bill, HB 4104, to close that loophole. It was referred to the House Local Government Committee, along with his bill to add libraries to gun-free zones. Neither bill has received a hearing. “It’s been there 10 months and I would expect it’s not going to be taken up,” Schor said.

Committee chairwoman Rep. Amanda Price, R-Park Township, said there are 71 bills or resolutions before her panel, and Schor’s “are among a number that have not had a hearing to date.”

Despite state law and challenges from gun-rights activists, many Kent ISD superintendents assert they will not allow guns in their schools. Superintendents say principals and teachers cannot determine whether a person who walks into school with a gun has bad intent or not. An armed person easily could strike fear into students and create a panic, they say. “Every superintendent in this state has a responsibility to create a safe and orderly environment for the children who attend his or her schools,” said Rockford Superintendent Michael Shibler. “Creating that safe environment is what I’m doing right now. I’m just doing my job.”

Shibler wrote to area legislators asking for a change in the law after an incident Sept. 4 at a Clio elementary school. When a parent picked up his daughter carrying a pistol on his hip, police were called but said he had that right as a concealed-weapons permit holder. Shibler said he was “incredulous” to learn that was legal. “I will challenge anyone who enters any of our facilities with an open weapon and have them removed from the premises,” he wrote to legislators. Police will be called and the building locked down, he says.

Rockford’s lawyers at Miller Johnson supported his position, writing in a memo that schools may be able to remove a visitor “when possession of a firearm causes a disruption tothe educational environment.”

Shortly after school began, Northview Superintendent Michael Paskewicz directed all staff to ask anyone carrying a gun to leave, call 911 and lock down the building. He said school shootings, gun-rights rallies and open-carrying at public meetings concerned him someone might challenge Northview’s policy. “The law may allow them to enter, but common sense and good judgment does not,” Paskewicz said. “When all else fails, we’re going to use common sense and good judgment.”

Most districts say their policies have yet to be challenged, but open-carry advocates have tested the water in a couple. A resident who repeatedly has come armed to Grand Rapids City Commission meetings carried a gun on his hip to a Sept. 24 commission meeting at Stocking Elementary School. Tom Lambert has long argued a city ordinance banning open-carry violates state law.

Mayor George Heartwell said he was frustrated he could not throw Lambert out of the meeting. “I stayed angry throughout the meeting,” Heartwell said later. “I’m distressed we don’t seem to be able to keep guns out of schools and out of public meetings.”

In meetings, a gun intimidates others from speaking and “puts a damper on the democratic process,” he said. In schools, there is no way for a principal to know whether an armed person is a “good God-fearing

, taxpaying citizen who wouldn’t think of shooting a child, or …. a crazed maniac who’s going to start mowing down children in the cafeteria.”

Grand Rapids Public Schools prohibits weapons in schools but will comply with the law, said spokesman John Helmholdt. That means visitors carrying guns may be admitted to a school’s front office but do not have to be allowed in the hallways, said Larry Johnson, GRPS assistant superintendent/executive director of public safety.  Although schools are public buildings they are not open to the general public, Johnson said. “Anything that’s disruptive to the environment we should have control over,” said Johnson, who also is president of the National Association of School Safety and Law Enforcement Officers.

Armed visitors will be asked to put their guns back in their vehicle before being allowed inside, Johnson said. If they refuse they will be considered trespassers. “It would be no different than if a person brought a dog on a leash in the school” or a bottle of liquor, he added. “We have a right to modify where individuals go in our buildings when our children are there.”

Pushing for Change, Getting None

Educators’ pleas to legislators so far have gone nowhere. While groups such as the Michigan Association of School Administrators support Schor’s bill to close the loophole, gun-rights groups like Michigan Open Carry Inc. oppose it. “I think people need to have a way to protect themselves wherever they go,and because of current pistol-free zones, it’s the only way people can protect themselves in some places,” MOC President Phillip Hofmeister told MLive.com earlier this year.

Educators pushing legislators for change “have been told it’s a non-starter,” said William Mayes, executive director of MASA. “The fact there are groups of people wanting to push this position by open-carry onto school grounds is absolutely ludicrous and stupid,” Mayes said. 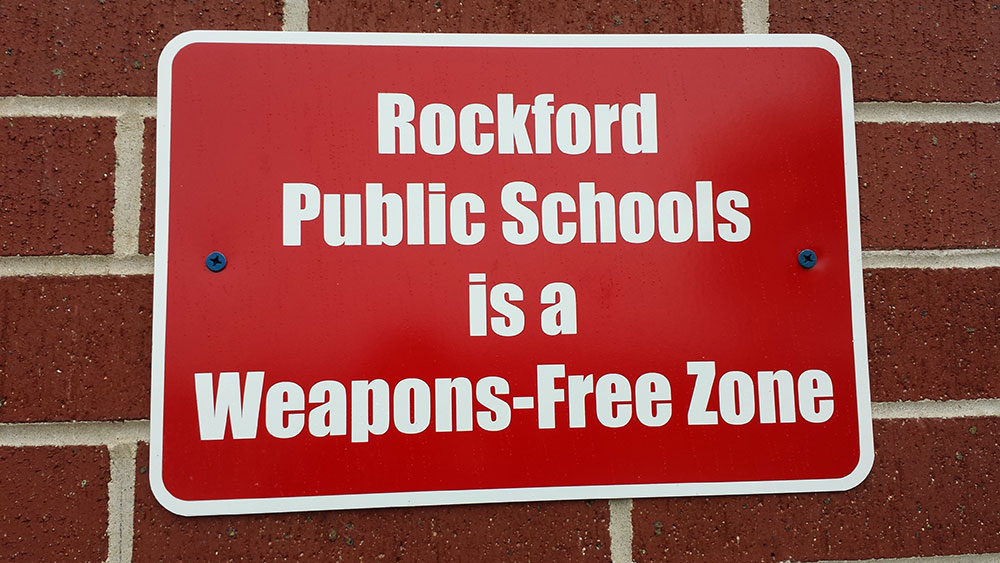 Meanwhile, Sen. Mike Green, R-Mayville, has introduced a bill, SB 213, to allow concealed pistols in schools if the school board or chief officer approves it. A bill Green introduced last year would have allowed gun owners with extra training to carry concealed weapons into schools and other areas, but would have closed the open-carry loophole. Gov. Rick Snyder vetoed it four days after the Newtown school massacre.

Rep. Lisa Posthumus Lyons, R-Alto and chairwoman of the House Education Committee, said she is working to strike a balance between protecting school children and the rights of gun owners. “I understand how someone openly carrying a gun in a school could distract from student learning, so I support changing the current law,” Lyons said in an e-mail. “On the other hand, I wholeheartedly support the rights of law-abiding citizens to carry concealed weapons, and I do not believe ‘gun-free zones’ make people safer.”

Enslen of Thornapple-Kellogg disagrees, saying news of school shootings provides ample arguments for tighter gun restrictions.  “Something has to happen,” Enslen said. “All we have to do is open the paper to know guns and schools don’t mix.”