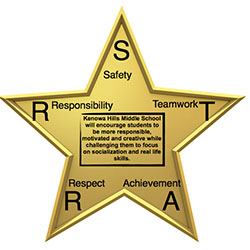 For just a split second, Tiana Studebaker hesitated when she saw a man lying on the bottom of the pool.

“I was like, ‘This isn’t my job. Somebody go down there and get him!’” recalls Tiana, a self-assured seventh-grader at Kenowa Hills Middle School. “But nobody was going down, so I went and did it.”

By diving into her apartment complex pool and pulling the unconscious man to the surface, Tiana likely saved his life. Bystanders helped pull him from the pool and revived him with CPR.

Her quick thinking in the July 15 incident won her an Outstanding Youth Award from the Crime Prevention Association of Michigan at its state convention in Traverse City.  She also was honored by the City of Walker with its Citizen Life Saving Award, along with Christina Saenz, a resident of Old Orchard Apartments who helped pulled Joseph Habineza out of the pool and administered CPR.

“Without her actions he’d still be at the bottom of the pool probably,” Walker Police Deputy Director Greg Long said of Tiana. “She certainly got the wheels of resuscitation rolling.”

Tiana recently was recognized by Kenowa Hills Middle School for exemplifying its Shared Vision and Code of Conduct. Students formulated the vision and code over two weeks of consultations. It was presented at a special assembly, and Principal Joe Haines brought Tiana forward as a prime example of the code’s expectations.

Tiana said her actions were influenced by earlier experiences. When she was 5, a cousin saved her from drowning in a hot tub, she said. On a competitive swim team some years later, she watched as a coach saved a boy who had hit his head on the diving board.

She was swimming along with other residents of Old Orchard Apartments when she saw Habineza, a North Carolina resident visiting a friend, struggling in the water after slipping into the deep end.

“I thought he was just playing around,” she says. But when he lay motionless on the pool’s bottom, she dived in, poked him and realized he wasn’t playing. She surfaced to catch her breath, plunged down again and hauled him up.

After helping to pull him out, Christina Saenz, an off-duty medical assistant, administered CPR with another, unidentified adult. He had revived and was coughing up fluids when Walker Police arrived. The CPR was “scary” and made her cry, Tiana admitted.

An ambulance transported him to a hospital. After his release he visited Tiana’s apartment, bearing thanks and a gift of groceries.

What gave her the bravery to act where other 12-year-olds might have freaked out? Tiana answers as quickly as she dived in: “I didn’t think about it. I just did it.”