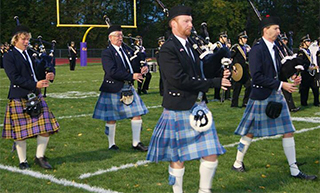 When Caledonia High School’s band director Kyle Wellfare first tried to play a song on the bagpipes, it didn’t go smoothly.  “This is the hardest thing I have ever done,” he remembers saying. It got easier, and he and student Chris Traetz went on to form The Caledonia Pipes and Drums, which is believed to be the only high school club of its type in the state. About eight students play the pipes at school and area events, with another dozen just beginning to learn. Add them to the six drummers learning highland drumming techniques, and the group can be as large as 20 members.

Bagpiper Adam McVay joined the club because he loves music and loves a challenge.  So far, his experience has been great, he says. Out of all of the instruments he plays, it’s his favorite to play. Plus, bagpipes are cool.

“It wasn’t difficult to learn the notes, but once I started on the actual pipes it was very hard to get the coordination down,” he says.  “Most of my friends have been very supportive over me playing the bagpipes, and some of my friends have wanted to try to take up the instrument because I’m doing it.”

All of the group’s members are interested in the Scottish art of bag piping, Wellfare says. “We were particularly interested in the pipes, because of our mascot being the Fighting Scots,” he says. “Musically, the bagpipe is like no other instrument. It has a certain quality of soothing the soul when we play. It is both eerie and beautiful. It always draws a crowd when we play pipes.”

Complex fingerings, grace note patterns and coordination all are part of bagpipe playing, making it one of the hardest instruments to learn, but according to Wellfare, no musical background is needed. “We teach all that is needed to learn,” he says. “Of course, music reading is an advantage, but definitely not a showstopper. A few have started lessons and dropped out, but for the most part our students have stuck with it.”

The group got its start in March 2011 when Traetz – who has since graduated and gone on to Western Michigan University – wanted to learn how to play the bagpipes. He and Wellfare started taking lessons from Dan Smith, a community member whose children attended Caledonia in the 1980s.  Smith told Wellfare that while bagpipes are difficult to learn, it’s like riding a bike. “Once they got the knack of it, they would never forget it,” Smith says.

Learning to play the bagpipe begins with practicing on a chanter. This gives students an introduction to the instrument so they know if they want to continue before buying the real thing, Wellfare says.

The minimum price for a set of pipes is about $900, although they can be found more reasonable on e-bay. “Each student, because of the nature of bagpipes, wants to own his or her own set of pipes,” Wellfare says.

The Caledonia Foundation bought a set of pipes, practice chanters and reeds for the group, which is not funded by the school.  A donation of Musselburgh tartan kilts and other accessories came from a pipe band that no longer plays together.

The group’s first concert was in the spring of 2012.  Today it leads the high school band into the stadium at football games and performs at local events. Some members play private parties.

“Socially, we have become great friends and enjoy seeing each of us progress and enjoy this pastime more and more each week.,” Wellfare says. “It is like our own small fraternity of musicians. We look out for one another, teach one another, and we work together to form one unit, with maybe a little friendly competition.

“Our goal now is to teach enough students and adults to keep the tradition going so that when students graduate, others step up. Our teaching staff of pipers and drummers is completely volunteer. We do it to keep the art alive.”