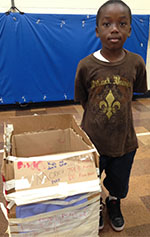 Inspired by a 9-year-old boy from California, West Elementary School third-grade students put their imaginations to the test creating an arcade made of cardboard, complete with all the bells and whistles.

From an arcade basketball game to a rocket ship with a seat, their creations took up the gymnasium recently for students to play and enjoy.

Teacher Kelly Hammontree was inspired to set the students to work with recycled cardboard by “Caine’s Arcade,” a film about 9-year-old Caine Monroy, who spent his summer vacation building a cardboard arcade in his father’s used-car part store in East Los Angeles. He invited customers to play, but for a long time no one did. Filmmaker Nirvan Mullick stopped in to buy a door handle for his car and became Caine’s first customer.

Mullick created a film about Caine and surprised him with a flashmob of customers. The film, posted in April 2012, went viral and inspired the start of a nonprofit called the Imagination Foundation to foster creativity and entrepreneurship. A scholarship fund for Caine has raised more than $230,000. 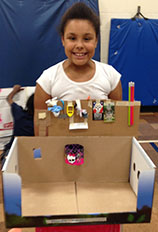 Hammontree’s class was participating in the Imagination Foundation’s second annual Global Cardboard Challenge. More than 70,000 participants from more than 40 countries participated. A Day of Play was held Oct. 5.

“The minute our class finished watching Caine’s story, my third graders were so excited,” Hammontree said. “It didn’t take much for the kiddos to convince me that we needed to participate in the challenge.”

Hammontree said she liked how students were inventive, without websites or wires.

“It was just the chance for them to be creative and use their imaginations with everyday materials,” she said.

Students worked relentlessly on their projects. “You would have never known they were working on a big project, they were so quiet,” she said.

Kylee Davenport created a Popsicle dispenser and passed out 27 Popsicles to classmates. “It was so fun making it,” she said. 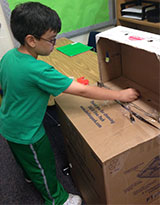 A love of monster trucks was behind a cardboard monster truck stadium built by Majer Davenport, Alejandro Cave-Partida, Emiliano Vasquez and Angel Rosales.Monster truck toys, paint and marker were used to create it “Every single girl and boy was coming to play,” Alejandro said.