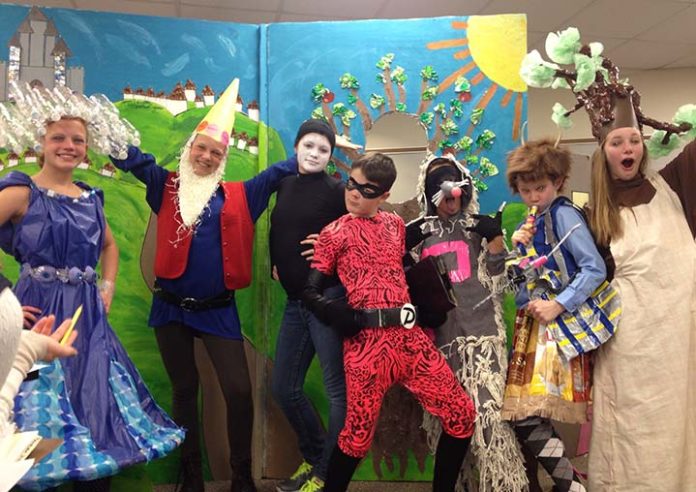 A tree-killing princess that’s been turned into a tree, an all-in-one-seven-dwarfs dwarf and a superhero that’s ready to solve wardrobe malfunctions at any time were the key ingredients for the Thornapple Kellogg Odyssey of the Mind Middle School team’s success in securing the second spot in its division in the World Competition held at Michigan State University last weekend.

The team, that included five sixth graders and two seven graders, impressed judges with their creative solution to a problem that required a character that acted naturally — to them — but odd to those around them.  Two other area schools, Crestwood Elementary from Kentwood Public Schools, and Rockford High School, won the top spot of their divisions, I and III respectively.

“It’s a good way to see how well the team works together,” she said adding the team was also paired up with students from China to be their ‘buddies” and help them navigate the college.   “It’s more of an experience and less than a competition. The kids learn about other cultures, and from people in other areas. At the end, we were exhausted, but we had lots of fun.”

Halle said the program helps students experiment different ideas, without being judged, in a teamwork environment with peers.

“They had a lot of superheroes and princesses and had to agree what would be the funniest and best fit the problem given to them,” said Halle, adding adults are not allowed to help in any way in the preparation to the competition.

“I’m there to make sure they don’t hurt themselves and don’t burn down the school but I can’t help them or make suggestions,” she said.  “Sometimes you know it’s not going to work but you have to let them try it and figure it out. It’s all about letting your child fail and take it and say ok that didn’t work. What can I try next?”

The 8-minute quirky play grabbed the attention of judges, but that second place at the competition wasn’t all the team got as a reward, she added.  “It’s more of an experience and less than a competition. The kids learn about other cultures, and from people in other areas. At the end, we were exhausted, but we had lots of fun.”