Veterans’ Day – Each and Every Day 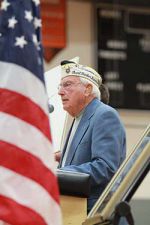 From an Army sergeant leaving this week to Afganistan to a World War II veteran who was at the attack on Pearl Harbor, servicemen and women were honored in a community Veterans Day celebration at Thornapple Kellogg High School.

About 70 Middleville area veterans attended the event Tuesday, including Army Staff Sgt. Case Spiering, who will leave for Afghanistan Thursday.  A member of the National Guard before joining the  Army, Spiering already served in Iraq.  His daughter, Kelly Spiering, is a senior at Thornapple Kellogg High School.

A standing ovation for the veterans that started the event, followed by everything red, white and blue, including the singing of  the national anthem and “America the Beautiful,”  readings from students and the speech by Herb Elfring, the World War II veteran who saw action in Pearl Harbor.

Elfring gave students a history lesson in what war was like. He was within 15 feet of explosions twice while in the service. He told about seeing a kamikaze pilot aiming for a ship next to the one he was on explode in the air before hitting the boat.  About his boat hitting a sandbar when arriving in the Philippines, forcing them to walk in water up to their chin to get to the island.

“Veterans Day is not just one day a year, it’s each and every day,” said Tony Koski, Thornapple Kellogg High School prinicipal.

“I thought it was very touching,” said tenth-grader Teal Krwisenga, who watched along with other high school students. “We learned a lot from it,” said. Zack Vachon, an 11th-grader. “It shows you how important Veteran’s Day is.”

John Loftus, an Army veteran from Middleville, was instrumental in starting the program, which is in its third year, said Koski. The community had held a Veteran’s Day celebration for several years, and asked the school to take

it over. “We welcomed it with open arms,” Koski said. History teacher George Dudik and his Advanced Placement U.S. History class put together most of the program this year.

“It’s been a great experience for the students,” Koski said. “How many times are you going to hear a vet from Pearl Harbor speak?”