This Time Last Year: Students Become Elves for a Day of Creating and Gifting 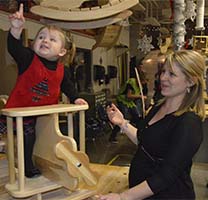 Maddie the Christmas elf introduced 5-year-old Lillian Forman to Bobby the elf, then explained the approximate dimensions of Santa’s gigantic sack of toys.

“It’s as big as this whole room!” Maddie Parker told Lillian. “And then he goes down the chimney to where your tree is!”

Lillian seemed impressed, as well she should have been. Maddie was dressed as a bona fide elf, after all, and the room was filled with other elves busily making toys. It sure looked like the North Pole all right. In truth, it was the North Rockford Middle School wood shop, magically transformed into Santa’s Workshop for one

night. Maddie and other eighth-graders from the school’s industrial arts program had built rocking-horse style airplanes over the previous two months. On Dec. 19 they gavethem to Lillian and about 15 other children from the greater Rockford area.

Santa Claus himself showed up, accompanied by Mrs. Claus, to hear children’s Christmas wishes before the elves presented them with their very own airplanes.

The lucky recipients were the children of two Rockford businesses, Creative Concepts and Rockford Ace Hardware, as well as children of school staff members. It was all part of a project by teacher David Albert’s advanced woods students to generate holiday spirit and give back to the community.

“The sooner humans learn that in their life, the better,” said Albert, in his first year at Rockford, “The more they’ll give back when they’re adults.”

It all made for a special night for the little ones, and a chance for students to put their woodworking skills to charitable use.

“I think it’s really fun hanging out with my friends building things to give back to the community,” said Zach Galle, one of the perkier elves. “I like seeing (children’s) faces light up when Santa comes.”

Lots of children’s faces lit up when Santa and Mrs. Claus made their entrance, ushered in by a rousing sing-along of “Jingle Bells.” Even though the first toddler on his lap burst into tears, it got better from there as each child got a chance to confide in jolly old St. Nick.

For parents and grandparents, it was a treat to see the wonder in their children’s eyes.

“Our kids are so excited to be here,” said Brian Barr, a North Middle teacher who brought his daughter Addison, 5, and son Nolan, 2. “Our daughter said, ‘Are those elves real?’”

Katie Slayton, an employee of Creative Concepts, called the event “a little too good to be true.” She said she appreciated its educational value for her son, Wyatt, 4.

“We thought it would be nice for him to see all the stuff and maybe take this class when he gets a little older,” she said.

Stan Gulch, manager of Rockford Ace Hardware, appreciated the workmanship of the planes.

“I love that grain,” he said, running his hand over one. “It’s perfect.”

Have fun, learn a lot and don’t eat the paste