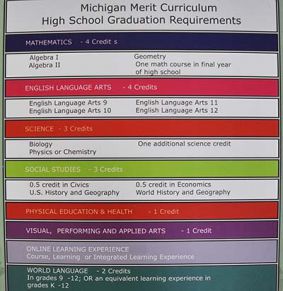 Touring one of the schools run by the Weiming Education Group in China, Kentwood Superintendent Scott Palczewski was surprised by the facility, the attentiveness of the students in teacher-led lectures and the school’s focus on the arts.

But when he saw a list of the state of Michigan high school graduation requirements hanging on a wall at one of the schools, he was simply taken aback.

“Chinese children know so much about us… they watch American television, they listen to American music, they learn and know English… and yet we know so little about them,” he said.

“They can come and assimilate into our culture. I don’t think our kids have a chance to do the same.”

To give them that opportunity, Kentwood Public Schools, along with Rockford Public Schools and Holland Christian School, have entered into an agreement that would bring nearly 60 Chinese students to West Michigan next fall.

The partnership, being piloted next school year, would not only provide students exposure to the Chinese culture but could also lead to West Michigan students and educators visiting China.

The agreement with the Weiming Education Group in China, a Beijing-based association managing 30 private schools across China, was announced earlier this year.

“We’re creating more opportunities for our kids to learn about China, about the Chinese culture, about their language,” Palczewski said. “If our children are going to compete internationally, they need to have exposure to other perspectives and other cultures.”

Kentwood schools are set to receive 25 Chinese students this fall and administrators have been sent to China this month to select the students from a pool of at least 50.

Palczewski said the weeklong trip to China included visits to schools in four of the country’s largest cities: Beijing, Chengdu, Guangzhou and Shenzhen. During the visit, he met with school administrators, parents and students to answer their questions about the school district.

“It was like going to New York City four times,” said Palczewski, adding that representing West Michigan was “one of the highlights of my career.”

Palczewski said during his visit he saw the students’ interest in American culture and pondered the relative indifference in the U.S. to learn about Chinese culture. His perception seems to be backed by data gathered by the Council on Standards for International Educational Travel, which recently released its 2012-2013 International Youth Exchange Statistics report providing data of high school students traveling to and from the U.S. to study for a semester or year.

According to the report, Michigan ranked #1 among all states receiving high school foreign students this year, with 2,412 students. But the state ranked #8 in outbound students, with only 41 students traveling abroad to study for a semester or year. At the national level, China ranked as the second nation sending students, with 4,176 Chinese students enrolled in U.S. schools this year. But U.S. students studying in China were only 36, with most preferring to study in Europe, Japan and Brazil.

“If China is indeed the emerging power with its economic growth, its building growth, the size of its population, the number of American companies that make cars that are there, I don’t know that we can continue to be a one-way culture,” he said.

“This is an opportunity to build diplomatic ties with schools in China. It will expose our kids more and more to Chinese culture.”

District administrators ask those interested in hosting a student from China to contact the high school office at 698-6700. Hosting families will be reimbursed for some of the cost of food and housing.

By the Numbers
Top 10 countries sending students to the U.S.:

Connect:  The Council on Standards for International Educational Travel

Signed by the author