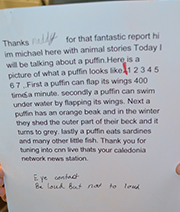 “Good morning. It’s time to tune into CNN Live.” It’s sixty seconds to news time. Quiet comes over the studio. The crew of the CNN news team watches the computer clock count down to the start of the daily broadcast. The show kicks-off with the forecast from Kathleen Nguyen noting there’s a 60 percent chance of rain. The camera cuts to the lunch man. “Today our lovely lunch ladies will serve …” Wait a minute — the lunch man?

Yes, the lunch man, because this is not CNN live from New York, but instead it’s Shelli Abel’s fifth-grade room at Caledonia Elementary, where at 8:50 a.m. every weekday morning the Caledonia Network News is broadcasted over classroom televisions to fellow students and teachers.

News, weather, sports and features are the primary segments. No teleprompter is used, so students read from a sheet of paper with spaces on it to remind them to look up at the camera. They have three background sets: a green screen and murals of a nature scene and a fireplace.  Two cameras are used, so with the sign from the 10-year old directors, a button is pushed by a technician and the TV picture changes seamlessly to another set, just like the real thing.

The class takes its job seriously and has learned the protocols. You can’t be late for meetings, or you’re not on air that week. You can’t go on if you don’t have your script on paper. Student directors have even called team members on snow days to make sure they know what they’ll be doing when school resumes. “It’s surprising how well they perform,” Abel says. “Many of them are mini-adults.”

These mini-adults are still fifth-graders, so that means they can act like fifth-graders, which is why one day, when snow was forecast, they threw two bags of cotton balls at the weather announcer.

Besides news, weather and sports, there are features like Sid the Caledonia Science Kid who stops by in his lab coat and goggles to do an experiment some days. Other guest appearances have been made by Sal the History Pal, Zoei the Zookeeper and Holly the Holiday helper. Reporters sometimes show kids how to make crafts or recipes, and, once in a while, knock-knock jokes make the 10-minute news show.

Abel’s 40-student class is split into teams, with each being responsible for the broadcast one day of the week. Students submit their reports a day before broadcast. They get much of their information from kid-friendly web sites and give up a recess to plan the show. “They want their day to go really well,” Abel says. “They take pride in it.”

Abel sees firsthand how her students learn to be more independent and responsible. She also likes how the class equips students with real world knowledge. “Kids need an opportunity to apply what they learn,” she says. “We solve a problem almost every day before we go on.”

Those problems have to be solved quickly and calmly. “If something goes wrong, you can’t freak out, ‘cause the show isn’t about freaking out,” says student Reagan Morse.

Public speaking, the importance of being prepared, communication skills and working with others are all learned through the show. “You have to use teamwork, not just one person does it,” says student Andrea Peterson. 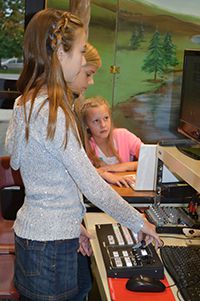 The students are “using an enormous amount of creativity and technology skills,” Abel says. They moved Sid the Science Guy from doing experiments in the studio to a real chemistry lab and have put his lessons on YouTube. They created a math story problem contest, a “who-am-I” contest and made a laugh track to go with the knock-knock jokes. The laugh track wasn’t as easy to make as they thought it would be. “The first few tries sounded like a whale crying,” says one student.

The class is the brainchild of Abel, who got it started about 15 years ago after applying for a Michigan NextDay Teacher Innovation Grant. It was still using the original equipment from that grant until a recent bond package passed that included for $10,000 for the equipment to be brought up to date.

“They’re very, very supportive at this school, that’s why the equipment update was included in the bond package,” Abel says. “Our teachers faithfully watch it. Without their support it wouldn’t exist.”

The class is time-consuming, Abel says, but she loves it. “I started it,” she says. “If I didn’t think it was so valuable, I wouldn’t do it.”

Video of a CNN broadcast