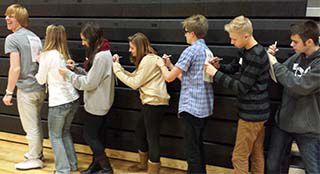 More than 50 high school students line up on one side of a school gym, ready to acknowledge the secret hurts of their lives.

A day-long workshop on bullying and self-esteem called Chain Reaction is nearing its end. A lot of it’s been fun, with wild games and plenty of laughter. But now it’s time to be brave, workshop leader Keyona Williams tells the students at North Rockford Middle School.

“We all wear masks,” Williams says. “We wear masks because we think they protect us. But they don’t protect you. They hide you.

“If you can show enough courage to take your mask off, throw it down and break it into a million pieces, you’ll realize that you are not alone.”

Then come the questions. If one applies to you, step across this white line, Williams tells them.

Do you identify as Asian? she asks. Two girls step forward, turn and face the rest, who hold their hands over their hearts in support. Latino? One student steps out. African-American? Seven.

More come forward as the questions get tougher: Teased for being fat? A couple dozen. Called a nerd, loser or not cool enough? Almost everyone. Called gay, a queer or a fag? Almost 20. Thought seriously of committing suicide?

A boy fights tears; a girl leans her head on another’s shoulder. An adult embraces a teen.

“I want you to notice the support you have,” Williams says. The students at the white line look at the others, who are holding hands over their hearts.

The emotional exercise came during one of two recent workshops, one for the high schoolers and the other for middle school students. About 200 students and staff took part in the Chain Reaction events, sponsored by Kent ISD and funded by the Doug and Maria DeVos Foundation.

The workshop is offered by Rachel’s Challenge, an international anti-bullying outreach in memory of Rachel Joy Scott, the first student killed in the 1999 Columbine High School massacre. Started by her father and stepmother, the nonprofit has presented programs to more than 19 million people based on Rachel’s message, “People will never know how far a little kindness can go.”

The six-hour training and awareness-raising session builds on Rachel’s conviction, expressed in writing shortly before her death, that people showing compassion can start a chain reaction of kindness.

Her message was brought home powerfully to students at North Middle, in video clips depicting both the horror of Columbine and Rachel’s generous spirit.

A co-presenter, who called himself JB, forcefully laid out a five-point challenge:

“I want you to think about the people you see every day, and how one act of kindness can make a big difference in their life,” JB told them.

Breaking Down Barriers, Taking Off Masks

Chain Reaction is part of a broader Rachel’s Challenge outreach that includes programs for elementary schools, teachers, colleges and corporations, a national summit and online courses. Its website claims dramatic results, such as reductions in school suspensions and e-mails from students who said they had changed their minds about killing themselves.

The impact was clear with some students at North Rockford Middle. In the middle-school session Nov. 7, one girl apologized to another student for treating him so badly. They embraced.

North Rockford Principal Lissa Weidenfeller later met with her 55 students who attended, and said they will work with teachers to promote the program throughout the building.

“It was one of the most powerful presentations that I’ve ever been to,” Weidenfeller said. “I truly believe that the presentation has touched many of the lives of the students and the staff forever.”

There were hugs and tears at the high school session as well, following the exercise in which students admitted to being bullied and harassed. Those who had indicated suicidal thoughts were referred to counselors.

At day’s end, some students stood and thanked others for giving them support and the courage to take off their masks. “You guys just brighten my whole outlook on life,” one student said.

Christian Walters, a Rockford High School junior, said it was “kind of scary” to admit his problems, “but at the same time I knew I wasn’t alone.”

The takeaway for him? “Don’t be judging people,” he said. “Sit with them and talk to them.”

And if you see a student crying in the hallway, he adds, put your hand over your heart.