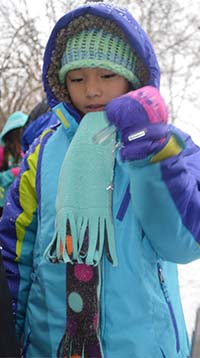 Despite her numb fingers on the 28-degree day, CA Frost Environmental Science Academy sixth-grader Lux Howell shook a vial filled with river water for several minutes to measure the amount of oxygen in it, part of a process to determine water quality.

While Lux worked with her team on their portion of the testing, her classmates collected data on phosphate and nitrate levels in Grand River water collected in downtown Grand Rapids. They wrote down observations for a student research project underway on the health of the river and whether rapids should be restored by removing five dams.

“I like learning about nature and how it works,” said Lux. “I don’t think the dams should be removed because all the life that has adapted here without the rapids would have to re-adapt.”

These young stewards of the Great Lakes watershed are enrolled at the Grand Rapids Public Schools’ specialty school because of their interest in science and the outdoors. The data collected on the trip along the riverbanks will be used for a project involving sixth-, seventh- and eighth-graders made possible through a local coalition called Groundswell. Their research will look at the history of the river and future possibilities for it.

The classes are seeking answers to the whether the dams should be removed and if the banks should be restored to their natural condition,said Mary Lewandoski, a middle school science teacher who partners with Groundswell.

Dam removal and rapid restoration is a hot topic in Grand Rapids, where the nonprofit Grand Rapids Whitewater, dedicated to putting rapids back into the river, is working with city leaders on a plan. Students are divided over the idea.

“I think the dams should be removed so the rapids can be grand again,” said student Noah.

“I wouldn’t like them to take out the dams,” said student Edwin Lopez. “It might flood the whole city when it rains a lot again.”

Creating Stewards of the Environment

The field trip was funded by a grant made possible through Groundswell, which promotes environmental learning. Getting outside to learn and encourage students to become environmental experts is the goal of Groundswell, and ties in with CA Frost’s curriculum, said Lewandoski, a lead teacher for the four-year old coalition of community partners.

Groundswell focuses on creating opportunities for hands-on environmental learning for Kent County students. It’s funded through the National Oceanic and Atmospheric Administration, the Great Lakes Fishery Trust, the Wege Foundation, the Frey Foundation, and the Baldwin Foundation, and partners with 15 schools. Grand Valley State University’s College of Education is the fiscal agent for the grant-funded program.

CA Frost students also spent the snowy November day measuring the width of the river along Grand Rapids’ Blue Bridge and dropping a “Poohstick,” which is named after a game played in a Winnie-the-Pooh book, into the water to measure the flow rate.

Other districts involved in Groundswell projects include Rockford, Kentwood, Sparta and Forest Hills schools. Other projects have focused on erosion prevention, gardening, recycling and creating a rain garden.