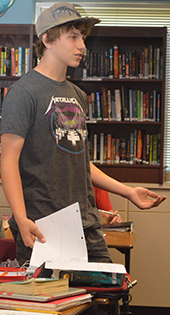 It’s debate day in David Stuart’s world history class at Cedar Springs High School, and the topic is timely: Is America the best nation on earth? Not so much, many students say. “I don’t think our country is the best because we rely on China to make most of our clothes,” Ryan Blue immediately pipes up. Others point to high dropout rates, unjust courts and the partial government shutdown as examples of America’s shortcomings.

“I think we’re beating up on America a bit much,” Stuart interjects at length. But he doesn’t squelch their opinions. The point of the debate is to get students to communicate their views effectively and confidently.

Finally, a couple of students rise to their country’s defense.

“George Washington could have been king,” Kris Wheeler says in a passionate mini-speech. “But we didn’t want to be like Great Britain. We wanted liberty and justice for all.”

Students mimic an explosion with their hands and whisper “boom” – the class’ highest honor for an awesome address.

This is Tech 21 Academy, a school within a school for students who want or need a different kind of teaching. In Stuart’s class, and in three others for Tech 21 students, character is key and challenge is normal.

“In a debate, every single kid is challenged to push themselves to the next level,” Stuart says. “Our goal is that they be the most college-and-career aware and ready kids that we can make them.”

Tech 21 started four years ago as an alternative program for struggling ninth-graders. It quickly broadened to include higher-performing students who wanted something different. It serves students who likely would be average in a regular program, Stuart says, “but who with some special instruction and a lot of opportunities could become exceptional.”

Major backing was provided by the Amway Corp., which continues to support it financially and hosts visits by students.

About 60 students are enrolled in each of the freshman and sophomore grade levels, selected on teacher recommendations and parent and student interest.

Tech 21 is not all about high-tech, although plenty of technology is infused and all students get Chromebooks. Other facets are of equal importance:

“To us it’s those character strengths that are a way better service we can give the kids than a bunch of time playing around on the computer,” Stuart says.

Whether it’s a debate, a biology lab activity or an English literature discussion, Tech 21 teachers want their students to interact. That helps them to analyze, think on their feet and communicate with others – all key skills for the workplace, Amway officials tell students.

Freshmen go to Amway World Headquarters in Ada to learn more about the realities of the work world, while sophomores present science projects that Amway employees evaluate.

Schools such as Tech 21 “are the type of school models we believe in because they promote team building, innovation and citizenship,” Amway spokesperson Angela Nelson said in an email.

Team-building at Tech 21 begins with an overnight getaway for freshmen at Camp Henry in Newaygo. There they begin to build bonds that are strengthened as they take all their academy classes together. Four of students’ five daily class periods are in Tech 21, and last for three trimesters instead of two for non- 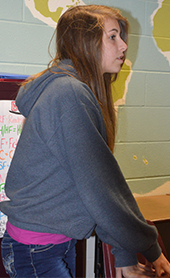 “When the kids are in class with the same group, after while they really build that confidence,” says English teacher Erica Beaton.

One former student went from skipping school out of anxiety to becoming one of Stuart’s top debaters. By keeping tabs on such students’ progress, the teachers make sure they are meeting their “social needs and little issues,” Beaton adds.

“If they have the love and know they’re being supported in who they are, they’re so willing to do whatever we ask,” she adds.

Sticking Together and Speaking Up

“I think we have a better chance of getting better grades and better opportunities,” says sophomore Stephanie Hay. “The teachers are amazing. They create great connections with you.”

On a recent morning, Stephanie took part in a “book waterfall” in Beaton’s humanities class. Students circled up and talked about books they had read or were reading for pleasure. Hers was “Legend,” a futuristic novel by Marie Lu. Others had read “The Hunger Games,” “Friday Night Lights” and “Catcher in the Rye.” 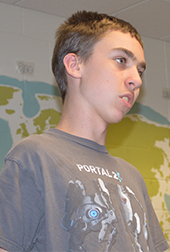 Beaton asks them why it’s important to balance their required texts with books of choice. Ventures Lexi VanDyke, “If all you’re reading is academic books, you’re not going to enjoy reading very much.”

Back in David Stuart’s history class, students conclude the debate by deciding they spoke louder and more confidently than in the previous one.

“We had a lot of great thinking today,” Stuart agrees. “Let’s give six claps!”  The class claps six times in a community-building ritual.

Afterward, Gage Heyboer, dressed in a Metallica t-shirt, says he loves Tech 21 because of “how much more work we do, and how much more effort the teachers want us to put in. It makes me feel like I’m going to go far in life.”

“They try to make sure we have fun doing all the hard work,” adds Wayne White. “That way we won’t quit wanting to do the work.”