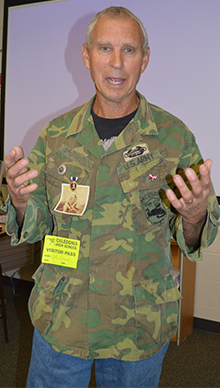 Pinned to John Brummel’s chest on the fatigues he’s wearing is a Polaroid picture of Phil, his good friend from when he served in Vietnam. Phil’s looking away from the camera, wearing the jungle fatigues and helmet he wore in combat. His machine gun rests on his lap.

“He died May 12, 1969,” says Brummel in a way you know it’s a date he thinks about and talks about frequently, and that he will never forget.  “He was shot in the head. He was still alive when I put him on the helicopter.”

Brummel’s standing in the front of the America at War class at Caledonia High School, telling his story of serving in Vietnam, especially “the personal side of war you may not have thought of.” His voice is steady, his words matter-of-fact as he describes the pictures on the screen in front of the class. A pause, a click, and another picture comes on the screen. “That’s where Phil was sitting when he was shot,” Brummel says.

Brummel understands people who are appalled that he and another Army friend decided to take pictures to document Phil’s death. “It’s difficult to show you that, but I have to,” he says. “Here’s my good friend dying.”

The 65-year-old veteran of the Vietnam War is sharing his war story today not just to teach kids about the war, but also about life.  “You can’t stand up in the middle of war and say ‘you just shot and killed my good friend,’” he says. “You took all of that away (from Vietnam) inside you. We didn’t stop and grieve. If you never get these emotions out of you, they’re going to kill you. When you say I’ll deal with it later, it will eat you up.”

The photos began with a picture of Brummel as a young, handsome man, shirtless and tanned, with a dazzling smile and blonde hair. He’d just turned 20, only a few years older than the students listening to him, but his carefree life growing up in Caledonia was about to end. “War makes you grow up fast. Too fast,” he says. Soon he would be fighting in the Mekong Delta in Vietnam as part of the 9th Infantry Division’s 2nd Battalion, 47th Infantry Regiment’s reconnaissance platoon. “I didn’t know where Vietnam was,” he recalls.

The America at War Class

While war is covered as part of history classes at schools, the America at War class is unusual in that it’s only about war. Heather Tornes’ created the curriculum herself and started teaching it four years ago at Caledonia High School. She does not use a book, but a variety of resources for learning, and focuses on 20th century conflicts and wars. “I think that it is important for students to learn about the most recent conflicts, especially Afghanistan and Iraq, so they can be knowledgeable about our military involvement around the world today and in more recent years,” Tornes says.

Brummel is one of several veterans and current members of the military who have come in to speak speak to the class. Veterans of World War II, Korean POWs and soldiers who’ve just finished tours in Afghanistan have talked to Tornes’ class, where every day, not just Nov. 11, is Veteran’s Day.  “They bring a perspective I can’t give them,” Tornes says.

Tornes’ inspiration for having the students listen to veterans comes from the Library of Congress’ Veterans History Project, which gathers recorded oral histories of veterans and archives them for future generations. Her class has submitted several accounts to the project. Students are required to record a history, interview a veteran or current military member for a report, or bring them in to speak to the class.

Big letters on the bulletin board near the door of her classroom declare “Freedom is Not Free.”  The words are surrounded by pictures of people in military uniform who have spoken to Tornes’ class. At the bottom right corner are two pictures of former students in military dress who have joined the service since graduating.

“I am always amazed at the fortitude and dedication of our people in uniform, and how so many of them rise to the occasion when asked. I have been fortunate to hear all the stories of the people that come in, and what I learn from them cannot be learned from a book or movie.”

Brummel received two Purple Hearts, a silver star, a bronze star and two Army commendations for his service in 1968 and 1969, and rose to the rank of Sergeant E5. He appreciates that the America at War class is offered to students. “I wish they would have had classes like this when I was in school,” he says.

Vietnam was an unpopular war and when servicemen and women returned, there were protests, race riots and political battles going on that made the U.S. a crazy place to come home to, Brummel remembers. Soldiers were so unwelcome, some were even spit on. “We found out the world didn’t want us to be home,” Brummel says. “Imagine coming home and being spit upon.”

He says he’s at peace now with the bitterness that engulfed him then, and he reminds the students the protestors had a right to do so. “That’s the beautiful thing about America,” he says. “We have a right to protest the country we live in. You and I live in the greatest country in the world. We are in this classroom because blood was shed.”

Operation Desert Storm in 1991 marked a turning point for his feelings. People were supportive of that war, and soldiers came home to formal celebrations with TV cameras filming the families rushing to greet loved ones at armories. “That’s the thing I needed,” Brummel says, adding it was then that he started marching in parades. “People came right off the street and shook your hands,” he says.

For some of the speakers, talking to the class is like therapy, Tornes says. “They finally get to tell their story and be appreciated – especially Vietnam combat veterans.”

Brummel wants the class to learn a lesson from what happened to him. “You’ll find life’s not fair,” he says. “It’s going to throw you some hard blows. You’re going to have to decide what to do with the situation in front of you.” 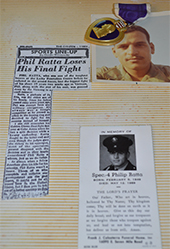 Brummel reads from a book a fellow veteran wrote that talks about while the involvement in Vietnam ended in 1975, it lived on for thousands of kids who did the fighting. “For us war never ended,” Brummel says, choking up at the man’s words. Many Vietnam vets couldn’t handle coming home, he explains to the class.

“Four days ago you were in a combat situation,” he says. “They fly you home, and you’re supposed to go back to being normal.” It felt like people were telling them, “OK, thanks, let’s get on with life.”

Brummel tells the class 100,000 Vietnam vets have committed suicide, compared to the 58,000 killed in the war. Many others suffer from post-traumatic stress disorder, a mental health problem that can occur after living through a traumatic event like war.

Brummel visited Phil’s family in Detroit when he returned home and remembers seeing Phil’s Purple Heart medal on the wall. He received the same medal. “From that time on it dawned on me, he died, his should have been bigger,” Brummel says of it. “I think I’m not worthy of it. Why did I come home and Phil didn’t?”

Brummel tells the class to remember what’s important in life. “Take the high road. Do the right thing,” he says. “It’s not about how beautiful you are, girls. Guys it’s not about being macho. It’s about character. You’re going to have choices to make. You are the leaders of tomorrow. You have to be strong.”

A student in Tornes’ class, James Bailard, asked Brummel to speak to the class. Brummel is a good friend of James’ family, and the student found himself choking up listening to his story. “I never heard his story before,” says Bailard, whose grandfather, Royal Bailard, also a veteran, came to class with him. “That was something.”

Tornes says she started her class to teach students about the wars and conflicts the U.S. has been involved in, but its focus has shifted. “We still learn about conflicts,” she says, “but more importantly, I try to instill in these young adults an appreciation for our current military and veterans and their service.

“Someone paid for the benefits that they enjoy everyday – it’s the men and women in uniform now and who served in the past,” Tornes says. “If that is all they take away from this class, I have been successful.”

Sensory exploration at the zoo