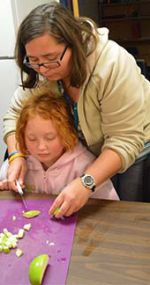 It’s Thursday at Southeast Kelloggsville Elementary School, and the final bell has rung. About 40 students remain after school to eat, take a cooking lesson or meet with a tutor or mentor.

In one room, several students and their parents compile the ingredients of a sweet, yet nutrition-packed, apple-berry crumble dessert with help from a YMCA instructor. In the cafeteria, students eat dinner before meeting with mentors and tutors from Calvin College and Cornerstone University.

Meanwhile, Brianna Vasquez, Kent School Services Network coordinator, can be found moving from room to room, making sure things are running smoothly. She simultaneously coordinates a book swap, where families donate one book and leave with an armload of new ones.

Vasquez, soft-spoken and described by colleagues as humble, has been a quiet force at the fourth- and fifth-grade school where she has brought after-hours programming to students.

She said she was motivated by her desire to serve the needs of a population which could benefit from increased access to resources. The school’s population is 50 percent Spanish-speaking, and about 85 percent qualify for free or reduced-cost lunch.

“I thought it was an injustice to not have any after-school programming for our kids,” said Vasquez, who started her position in the 2012-2013 school year.

As the busy evening progresses, there’s soon a card game underway, homework is completed, and conversations take place throughout the building.

Elementary students talk with their college mentors about what’s on their Christmas lists while showing off purchases from Santa’s Secret Workshop, and in the cooking class, the apple-berry crumble gets devoured.

Vasquez connected with community partners, including the YMCA and colleges, to get programs in place and fill the void left when the T.E.A.M. 21 program ended. T.E.A.M. 21, run by school districts in Wyoming and by the City of Wyoming Parks and Recreation Department, lost funding for elementary after-school programming last summer.

Now, all in one evening per week, families cook and learn nutrition tips, get to know each other, and students get homework help and connect with role models. Principal Paula Dykstra said the programs are a huge positive.

“She spearheaded it,” said Dykstra. “She spent her summer working with the colleges and getting this set up. We love having her here.”

Dykstra said Vasquez also helps communicate with families.  She has tackled the issue of students’ chronic absenteeism and tardiness by contacting parents and talking with them about issues at home.

“Because she is bilingual, it helps immensely,” Dykstra said. “She’s been phenomenal in everything she’s done.”

Vasquez, a graduate of Grand Rapids City High School and Michigan State University, taught for 10 years in Chicago Public Schools and at an international school in Guatemala City. She is working toward her master’s degree at Eastern Michigan University. She moved back to Grand Rapids two years ago and began the KSSN position.

“It’s a very fulfilling job. It’s a tough job because if people are needing your services, it’s because something unfortunate is going on in their lives, in general,” she said.

KSSN, a countywide program, brings social and medical services to students’ schools and homes. It is run through a partnership with seven districts and Kent ISD, working to increase student achievement, lower absences, and improve coordination and delivery of services as needed.

Vasquez said the KSSN model fit her philosophy of how to best serve the community.

“In general, it’s just about giving people more opportunities and chances,” she said.

A Peek at the Programs

It was the final week of the 10-week course, and participants answered quiz questions tied to healthy eating, demonstrating their knowledge on fats, vegetables and proteins.

The pair gets together to do “whatever Jasmine wants to do,” Barber said. They chat and read in the library.