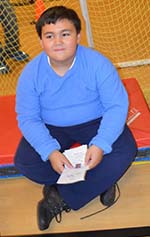 High winds rocked the ship as third- and fourth-grade immigrants held tight to their modest belongings during their simulated 14-day voyage to America.

After the journey across the ocean, students arrived safely at Ellis Island and began going through the process of entering the United States. Stations in the gymnasium that had been turned into an immigration-processing center manned by parent volunteers included an interview stop, medical, baggage and passport checks.

The immigration simulation at Oriole Park Elementary School brought students on a mock trip to New York in the late 1800s and early 1900s. The lesson tied in with the study of human geography. New York City’s Ellis Island was the gateway for millions of immigrants to the United States as the nation’s busiest immigrant inspection station from 1892 until 1954. 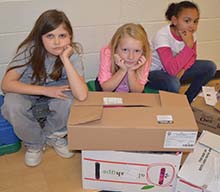 Students spent the day packing belongings in boxes and waiting in lines to be checked in by the parent volunteers. If all information was not complete for registration they were brought to the “deportation” room. Students had the option to resubmit forms and try again.

Students chose what country they were emigrating from, including European and non-European countries like Mexico and Vietnam. They learned about facing illness, leaving family and owning very little, with the hope for new opportunities in America.

Fourth-grader Chloe Ricker said she thinks immigrants were nervous. “It would be scary going to a new place,” she said. 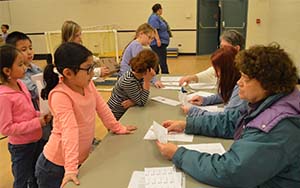 Fourth-grader Andrew Tran pretended he was coming to the United States from Vietnam. “I want to make it to America because the people are kind, and we don’t have to be poor there,” he said.