Caledonia’s Green Ways Save More Than a Million $$ 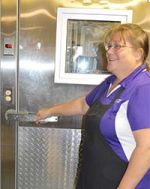 “It’s cold outside” is often heard this time of year, but folks at Caledonia Community Schools might be tempted to say “it’s chilly inside.” The district keeps its buildings at 68 degrees, one of several energy-conservation measures that have saved it more than a million dollars over the last several years, according to Superintendent Randy Rodriguez.

It’s hard to argue with putting on a sweater, when it results in more money spent in the classroom for students.

“With almost 1 million square feet of buildings, it really adds up,” says Gary Delger, director of operations. “It gives us bragging rights, and relates to jobs.”

Lowering building temperatures in the winter, increasing them to 78 degrees in the summer and buying energy efficient lighting, are some of the other actions that have saved on costs, Delger says. So have projects like combining freezer items in the summer so that others can be turned off.

“It takes a little bit of time, and it takes effort, but there’s a nice savings when you do that,” Delger says.

Switching the custodial staffs’ schedule also has helped save money.  Previously, specific custodians had been assigned to cleaning each of the buildings, which meant money spent to keep on the lights, water heaters and more. Today, the custodial staff works together cleaning two buildings at a time while equipment is turned off in the other buildings.

“The maintenance staff has been instrumental in this,” Delger says. “It was their idea to do the freezers and turn off the water heaters.”

It’s a Cool Thing to Do

Using better environmental practices and erecting energy-efficient buildings has been happening in schools across Kent ISD for several years. Many newer school buildings are built to LEED standards. Teachers receive professional development on environmental issues, while students and districts can earn Green School awards. And many schools participate in other energy-saving programs and certifications.

Caledonia pumped up its efforts with a 2007 millage, which paid for the building of Paris Ridge Elementary and other changes. Paris Ridge was the second public school in Michigan to get a LEED certified level rating, a system that rates how eco-friendly a building is. The 70,000 square foot building project included recycling 75 percent of the metal, cardboard and plastic used to build it.

A 20-foot wind turbine near the school’s sign out front that looks like a spinning egg beater creates enough energy to power the school computers. Part of the 2007 bond money also paid for high efficiency light bulbs in four buildings and upgrading boilers, Delger says. “The payback from those actions and the others will go on for years,” he says.

The district is one of four in Kent County honored with Chairman’s awards for energy savings in 2012.  In addition, every school in the district earned a Green Schools certificate.

Despite adding 85,000 square feet of buildings, the total energy usage in the district has decreased, Delger says, and the district continues searching for more ways to conserve energy. This year, the football field is trying 26 watt LED lighting, which light up about the same as 100-watt fixtures and will last 10-15 years.

Delger points out that everyone at the schools has played a hand in the cost savings and greener ways. “It’s not just me,” he says. “I’m the one who documents it. It comes down to every teacher turning off the lights.”

Delger says John Phillips, retired superintendent when Paris Ridge was built, was behind much of the district’s move toward greener ways. Phillips looks at it as a win-win situation that leads to student success. “It makes me feel good we were able to save money, and that money can go to students now,” he says.