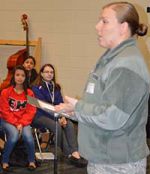 Make good decisions and focus on what you want in life, said Air Force First Lt. Ashley Alexander, whose choices led her from East Kentwood High School to the U.S. Air Force Academy to Afghanistan.

Newly home after a year of deployment, Alexander, a 2004 East Kentwood graduate, visited Vocal Music teacher Carrie Hoeksema’s women’s choral class to meet students who had sent her letters while she was stationed in Kandahar. After students greeted her with song, she shared words of advice about pursuing goals.

She told the class of freshman girls that while many of her peers chose to party she wanted to go to college and do something with her life, so she studied hard.

The class’ relationship with Alexander was established by way of correspondence and chocolates sent from the 65 chorus members to Afghanistan. They created a sign to welcome her home, and Alexander visited toshare her experience in Kandahar.

“Probably the hardest thing for freshman is seeing three years down the road,” Siderman said.

Alexander emphasized creating your own path, avoiding peer influences and pursuing goals. She told students to strive for grades good enough for college, even if it’s their backup plan.

A straight-A high school student who was on the cheerleading and softball teams, Alexander said she worked hard for admittance into the Air Force Academy, after her mother told her she could not afford tuition to North Carolina State University.

She said the academy was tough, but she graduated with more than 160 credits and a degree in behavioral science.

She volunteered to serve in Afghanistan, where she worked six days a week as an executive officer for an Air Force Air Command Unit.

She described long, hot days, hearing bombs outside the window and taking defensive positions. But she had volunteered for her deployment, and knew she put herself up to the challenge. “I signed up for it. I shouldn’t be shocked by a situation because I put myself there,” she said.

Alexander said the letters meant a lot to her. “It was definitely a huge boost. I loved getting mail. Every letter I got I put up on the wall,” she said.

She is working as a behavioral scientist at the Wright-Patterson Air Force Base, in Dayton, Ohio, and is moving to Texas to attend intelligence training at the Goodfellow Air Force Base in San Angelo.

Students said they were excited to meet Alexander. “I wanted to see how her experience was in high school and how she succeeded in high school,” said freshman Marian Ayad.

“I wanted to say ‘thank you.’ She left everything behind to serve,” said freshman Haley Steele.